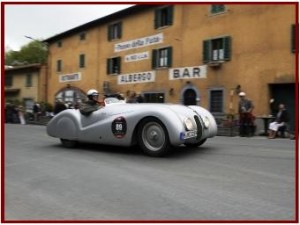 Debuting as a race car in 1936, series production of the BMW 328 finally began a year later. Advertising called it a powerful everyday car for travel and sport.

Built between 1936 and 1940, the BMW 328 was one of the most successful sports cars of the age because its design philosophy was exactly the opposite of massive cars from Mercedes-Benz and Auto Union.

The 328 roadster weighed just 780 kilograms and was powered by a modest 80 horsepower 2-liter engine when it entered series production in 1937, but  it was an early works racing version that surprised fans 75 years ago today at the Nürburgring.

There were 34 entrants listed in for the International Eifel Race sports car race on 14 June 1936. Seven were entered in the 2-liter class, and five were BMWs. Four were “Typ 319/1” cars; the other was a white 328 driven by BMW motorcycle driver with several world speed records, Ernst Jakob Henne.

Henne set a lap record for all sports cars during the race, and won the non-supercharged class in the rain. It was the debut of what became one of the most successful sports cars on the track. The win was to be followed by more than 200 others with factory sponsored and privateers running 328s into the 1950s.

There were only 464 cars made when BMW halted production in 1940 to pursue military projects, so the BMW 328 remains one of the most sought-after collector’s cars on the market.