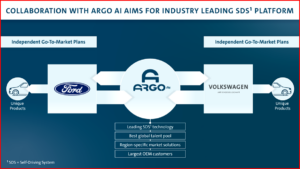 Volkswagen AG and Ford Motor Company created news back in January of 2019 when they announced the first formal agreements in a broad alliance that had far reaching implications in Europe, South America and Africa – ultimately globally. (Volkswagen and Ford Alliance Under Study, Volkswagen and Ford Announce Alliance Without Cross Equity)

As an unseen – or at least unannounced – development then, Volkswagen’s investment in Argo AI was finalized yesterday on June 1. As an outgrowth of the intended cost sharing Ford and Volkswagen last July announced a collaboration with Argo AI to introduce autonomous vehicle technology in the U.S. and Europe. In theory, this spreads costs. However, one of the many major challenges presented is how the technology is integrated at the brand level? Stay tuned for the answers that have yet to appear in showrooms. (Ford Wants Fully Autonomous Ride-Sharing Car in 2021, Volkswagen Group Debuts Investment Plan for 2020-2024, Volkswagen Joins Ford by Investing in Argo AI)

The cost and capital efficiencies are desirable – if not required – given the ambiguity of the business environment and disparate regulations in major markets. These continue to create challenges in a COVID-19 world for partnerships and investments in self-driving, to cite just one. Ford, demonstrably the weaker financial group of the two, maintains this collaboration remains on track and will be a positive development for everyone involved. VW results: €2.3 billion in Q1, down from a record €3.2 billion a year earlier. Ford Motor results: EBIT loss of -$177 million, as $346 million in positive EBIT from North America was more than offset by Auto losses in other regions. (Volkswagen Group Q1 Profit Drops as Europe Mars Results, Ford Motor Posts -$2 Billion Q1 Loss, Business, Politics, States Can Work Together in Germany)

The history of such industry collaborations is one of difficulties and the routes taken are littered with roadkill: The Chrysler Mercedes merger of “equals”; the failed GM Fiat engine venture; the Renault Nissan Alliance that with the addition of Mitsubishi is still struggling post Ghosn come to mind.

The numerous problems confronting Ford Motor and Volkswagen AG revolve around a central issue: Whether the two global giants and hundreds of thousands of workers can work together or consume shareholder capital at astonishing, company threatening rates without producing the promise efficiencies – on time and on budget.

In addition to shared development costs, the Volkswagen hookup makes Argo AI’s self-driving software the first with commercial deployment plans for both Europe and the U.S. Because it can tap into both automakers’ global reach, Argo AI’s platform potentially has the largest geographic deployment impending of any autonomous driving technology. The question remains can it make money?

“While our companies are sharing Argo AI’s technology development costs, Ford will remain independent and fiercely competitive in building its own self-driving service. Sharing the development costs with Volkswagen does not mean Ford is reducing its overall spend in the autonomous vehicle space. Instead, we are reallocating the money toward our unique customer experience including transportation as a service software development and fleet operations. We believe building the best overall customer experience will help differentiate us from our competitors in the self-driving space,” claims John Lawler, CEO, Ford Autonomous Vehicles. “Now, with Volkswagen’s investment in Argo AI complete, we can spend even more time and care ensuring we remain true to our goal,” he concludes.