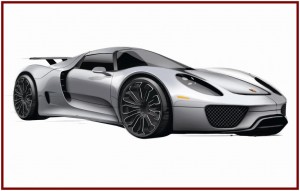 The pure electric range for the Porsche 918 hybrid is estimated at 16 miles, meaning the lithium ion batteries are limited in size.

Porsche AG announced today in Stuttgart that the Porsche 918 hybrid Spyder is now on sale for €645,000 – $928,000, gulp – plus value added tax and other country specific charges. Deliveries of the evolved version of the concept 918 hybrid that débuted in Geneva in 2010 will begin in September of 2013 in the Stuttgart suburb of Zuffenhausen. Series production of the two seat plug-in hybrid sports car will be limited to 918 units.

The 918’s V8 engine delivers more than 368 kW or 500 horsepower. This is increased by two electric motors with a total of at least 160 kW (218 hp). Fuel consumption of 918 Spyder is estimated at three liters of fuel per 100 kilometers (~ 74 mpg) based on the New European Driving Cycle (NEDC). At the North American International Auto Show in Detroit this past January, Porsche also showed a racing version of the 918 – RSR – that could be headed to the 24 hour race at LeMans this year, but no confirmation of that yet. (Porsche 918 RSR Debuts in Detroit. Latest Flywheel Technology Fantasy or a Serious LeMans Contender?)

Defining just what a “Porsche” is continues a debate about the Southern German automaker, now owned by Volkswagen. Porsche made its name with small, fuel-efficient, extremely capable variants of Volkswagens, but has recently thrived as the maker of four-door sedans and sport utility vehicles, and is also working on another sport utility vehicle as well as an electric Boxster. (See Porsche Cajun SUV to be Built alongside Larger Cayenne in Leipzig, Eastern Germany. Huge Plant Expansion Planned)

The 918 Spyder comes from the Carrera GT and Porsche 917 sports car, as well as the RS Spyder and appears to be close to the 2010 concept car. Unlike the concept car, however, the production version of the two-seater, based on a carbon fiber-reinforced plastic monocoque, features a manual roof system with removable roof panels that can be stowed in the front luggage compartment.

Power goes to the rear wheels through a 7-speed transmission. The two electric motors – one each on the front and rear axle  – are also used to provide and estimated zero-60 mph time of  3.2 seconds; top speed of 200 mph. (On pure electric power the 918 is limited to less than 100 mph.) A variable all-wheel drive system with independent control on both axles is used.

The energy storage unit is a liquid-cooled lithium-ion battery that can be charged from a conventional domestic power socket, delivering a range in excess of 25 km (16 miles) in the NEDC on purely electric power. The charging time depends on the country-specific mains network, being approximately three hours in Germany, for example. A quick charging option is planned to reduce charging time yet further.