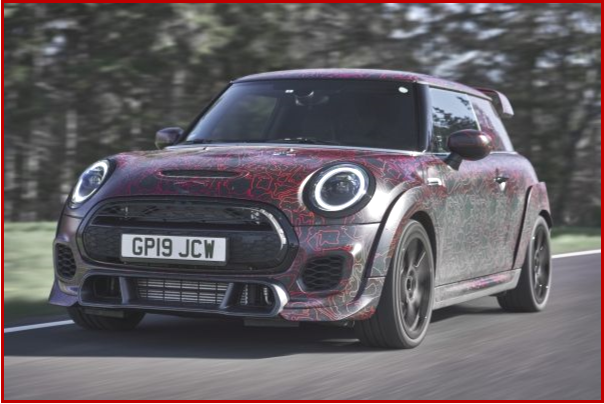 In 1961, the Mini fell into the hands of British racer John Cooper, who added a more powerful engine, bigger brakes, and tuning tweaks to create the Mini Cooper 997.

At the Monterey Car Week and the Pebble Beach Concours d’Elegance, the MINI brand celebrates its 60th Anniversary with a preview of both the MINI Cooper SE battery electric along with the John Cooper Works GP. MINI is an independent brand of the BMW Group.

In addition MINI will showcase its past with a grouping of historic models that include; a US spec 1965 MINI Morris Cooper S in full rally livery, two special edition classic Minis from 2000 that represent the last production run of the classic bodied Mini introduced in 1959, the first generation MINI John Cooper Works from 2006, and a 2009 MINI E, the brand’s first generation EV.

The new John Cooper Works GP represents the MINI brand’s top performance and is the third generation MINI John Cooper Works hardtop to have the GP badge.  This new model will be produced next year as a MY 2020 and will offer a new high-performance engine with MINI Twin-Power Turbo Technology that is expected to produce more than 300 horsepower.

The new MINI Cooper SE represents the brand’s next step in electrification. Based on the 2-door hardtop, the battery electric Cooper SE will be produced at the MINI plant in Oxford, UK alongside its gasoline powered internal combustion engine counterpart.  Production is planned to start in November this year, with this all-electric model to be available as a MY 2020 early next year. Pricing and MPGe rating from U.S. Environmental Protection Agency are not currently available and will be announced later this year.

With an electric motor delivering 181 horsepower and 199 lb.-ft. of torque, the Cooper SE claims acceleration from zero to 62 MPH in 7.3 seconds. The Cooper SE can charge on a 12-volt socket, a wall-mounted home charger, or public charging stations, including DC fast charging at 50 kW, which allows for 80% charge in 35 minutes.

MINI began in 1957 when the Suez Crisis had sent fuel prices soaring, leading many to start wondering if the large, gas-guzzling vehicles of the day made much sense. Sir Leonard Lord of the Morris Company issued his top engineer, Alec Issigonis, a challenge: design and build a small, fuel-efficient car capable of carrying four adults, within economic reach of just about everyone.

The two most important innovations Issigonis came up with were to create more room in the cockpit by pushing the wheels all the way out to the corners and turning the engine sideways giving the car more stability in tight turns and more passenger space on the inside.

In 1961, the Mini fell into the hands of British racing legend John Cooper, who dropped in a more powerful engine and bigger brakes, along with a few tuning tweaks to create the Classic Mini Cooper 997. Before long, the Classic Mini was outracing and outlasting the larger, more powerful, automobiles of the day. Visits to the winner’s circle became a regular event as Mini chalked up numerous international race wins – including 3 at the prestigious Monte Carlo rally from 1964 to 1967.