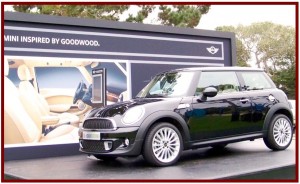 Zero to 60 mph in just 6.6 seconds, helped perhaps by a lightened wallet?

At the Pebble Beach Concours d’Elegance in California this weekend, BMW’s Mini is showing what it says is an exclusive special edition of the Mini Hardtop which has been produced in collaboration Rolls-Royce Motor Cars design team. (BMW owns Rolls.) A new two-seater Mini Coupe will also be shown publicly in the United States for the first time.

The Mini “Inspired by Goodwood” – how about MIBG? – has luxury accouterments at a luxury price of $52,000 (but that includes $700 in handling and delivery fees), when advanced orders begin later this month.

MIBG will be produced in a limited edition of 1,000 units – 140 of which will be available to U.S. punters, er, customers – and is said to combine driving fun with the same craftsmanship, select materials, styling and all-round ‘typical British understatement’ that are hallmarks of Rolls-Royce.

Deliveries of the 2012 model year vehicle, which will be launched as part of the exclusive ‘MINI Yours’ range of special edition vehicles and options, are scheduled to start in the second quarter of 2012.

The exterior is panted in a Rolls-Royce Diamond Black metallic or the Mini color Reef Blue metallic can be specified.

Inside, the instrument panel (including the surrounds of the central instrument and the air vents), the center console, carpet surfaces, the Lounge leather seats, the roof lining as well as the door, side and body pillar cladding have “exclusive” Rolls-Royce color Cornsilk, a warm and natural shade of beige. Only the upper section of the instrument panel is in black.

MIBG is powered by the turbocharged 1.6-liter four-cylinder engine that debuted in the 2011 MINI Cooper S. This engine includes a twin scroll turbocharger, direct injection and variable valve control and is rated at 181 horsepower. Zero to 60 mph is completed in 6.6 seconds, according to Mini. A choice of either six-speed manual and automatic transmissions will be offered.

The other Mini, the first two-seater in the line-up is focused on delivering maximum performance. The Mini Coupe has best performance statistics ever recorded by a mass produced Mini – 0-60 mph in 6.1 seconds, and a top speed of 149 mph.

The Coupe will have the current four-cylinder with outputs of 208 (John Cooper Works), 181 (Cooper S) and 121 horsepower (Cooper). Three versions of the MINI Coupe are available to order now with starting prices ranging from $22,000 to $31,900, based on the engine option. Guess which one is the most expensive…