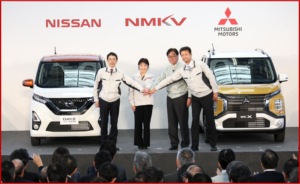 Look different to you?

In the face of the ongoing Carlos Ghosn scandal, Mitsubishi Motors and Nissan Motor Co. will introduce four new mini-vehicles in Japan through their joint venture, as the companies expand their collaboration.

Production of the all-new Mitsubishi eK wagon, Mitsubishi eK X, Nissan Dayz, and Nissan Dayz Highway Star, began today at Mitsubishi’s Mizushima Plant in Kurashiki, Japan. For the first time, the models will be offered with semi-autonomous driving technology, designed for single-lane use on highways. The models will go on sale in Japan later this month.

NMKV, a joint venture of the two companies, integrated Nissan technologies and Mitsubishi’s experience in mini-vehicle production into the light, tall wagon-type cars. The companies launched the first generation of the models in 2013 and have increased their collaboration since becoming Alliance partners in 2016. Last month, the all-new Nissan Livina, which shares a platform with the Mitsubishi Xpander, went on sale in Indonesia.

The all- new models are said to have improved performance, with upgraded platforms, engines and transmissions. While the Nissan and Mitsubishi mini-vehicles share key components, they claim to retain separate brand features.

At a ceremony today at the Mizushima Plant, Mitsubishi Motors Chairman and CEO Osamu Masuko, Nissan SVP Asako Hoshino, and NMKV President and CEO Junichi Endo said they will keep working together.