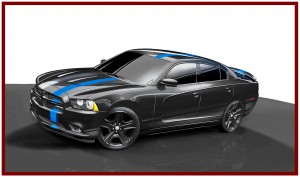 All Chrysler Group is saying is here’s a sketch of its new 2011 Mopar Charger. Dodge will release details of the latest Mopar muscle car “later this month,” which points to a New York Auto Show Debut.

“After the success of our Mopar 2010 Challenger, we moved on to the iconic Dodge Charger and added even more performance,” said Pietro Gorlier, President and CEO of Mopar, Chrysler Group’s service, parts and customer-care brand.

The 2010 Mopar Charger package builds on a successful limited to 500 copies edition of Dodge Challenger last year, which sold at $38,000.

The Mopar Challenger had an exterior dress up kit that included a body-color hood with scoop, body-color rear “Go-Wing” spoiler and strobe stripe graphics. The interior appearance package included a T-handle shifter, bright pedal kit, bright doorsill guards, premium carpet floor mats and a full vehicle cover. A 5.7-liter V8 was used in the Challenger, but the Charger could use a larger V8 engine. We’ll see.

Chrysler bought Dodge in 1928, and the need for a parts maker, supplier and distribution system led to the formation of the Chrysler Motor Parts Corporation (CMPC) in 1929. Mopar (contraction of MOtor and PARts) was trademarked for a line of antifreeze products in 1937. It also was widely used as a moniker for CMPC.

The Mopar brand really emerged in the 1960s – the muscle-car era. The Chrysler Corporation built race-ready Dodge and Plymouth “package cars” equipped with high-performance parts. Mopar carried a line of “special parts” for super stock drag racers and developed its racing parts division called Mopar Performance Parts to enhance speed and handling for both road and racing use.