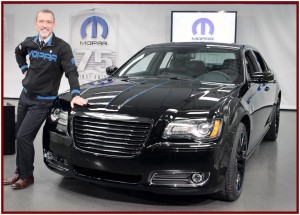 Today Mopar revealed four new personalized vehicles in Michigan, which will go on display at the Chicago Auto Show in February. Encouraged by the modest sales – 1,000 units – of factory made Mopar versions of the $40,000 2011 Dodge Charger, which followed a 2010 Dodge Challenger, the new Mopar ’12 300 is a quickie marketing car of 500 units due this fall off the new Chrysler 300 flagship sedan for $50,000.

Other Mopar offerings shown were a Fiat 500 “Stinger,” Mopar Jeep Compass “True North” and Dodge Dart “GTS 210 Tribute.” The components of these customizations will be available in the fall as stage kits or á la carte from the Mopar catalog.

Still working its muscle car roots, the Mopar 300 has a 363 horsepower (hum the Charger was 370?) 5.7-liter Hemi V8 engine and a now dated five-speed automatic transmission. A change from a 3.06:1 to a 3.91:1 final-drive means zero-to-60 mph times in the low 5-second range, according to Chrysler, same as the Charger.

As is the case with such marketing cars, the suspension is firmer – 42% stiffer front and 23% percent stiffer rear spring rates compared to the Chrysler 300 models with touring-tuned suspension. P245/45R20 Goodyear Eagle F1 three-season tires on forged aluminum wheels replace all-season radials, and “high-performance” brake linings mounted to dual-piston front and single-piston rear calipers provide the whoa for all the Hemi go.

Customization is king,” said Pietro Gorlier, President and CEO of Mopar, Chrysler Group’s service and parts brand. “These head-turning ‘Moparized’ vehicles show how we can go to the next level of personalization. With our best-in-class offerings of parts and accessories, we give our customers every opportunity to further enhance the appearance and performance of their vehicles.”

Earlier this month, at the 2012 North American International Auto Show, the Mopar kicked off its year-long 75th anniversary celebration with the introduction of the Chrysler 200 Super S by Mopar and the Dodge Charger Redline. Mopar, a simple contraction of the words MOtor and PARts, was trademarked in 1937.