More and/or Less – What Americans Know about Science 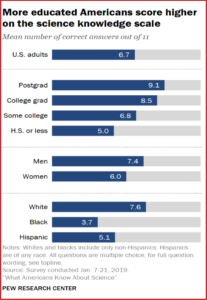 Our Friends at Pew Research Center write about a new survey that finds that many Americans can answer at least some questions about science concepts – most can correctly answer a question about antibiotics overuse or the definition of an “incubation period,” for example. (Before you read the report Test Your Science Knowledge by taking the interactive quiz. ) But other concepts are more challenging; fewer Americans can recognize a hypothesis or identify the main components of antacids.

The survey conducted Jan. 7 to 21, 2019, looks at the degree to which the public shares a common understanding of science facts and processes in an era of easy access to information and sometimes-intense debate over what information is true and false. Americans’ knowledge of specific facts connected with life sciences and earth and other physical sciences demonstrably varies, says PEW. About eight-in-ten (79%) correctly identify that antibiotic resistance is a major concern about the overuse of antibiotics. A similar share (76%) know an incubation period is the time during which someone has an infection but is not showing symptoms.

Science covers numerous fields and encompasses a vast amount of information, and the index of science knowledge can cover only a small slice of this information. However, the rationale for the scale stems from the fact people who happen to know more from this set of questions are also likely to know more about the vast array of science information, generally.

There are wide educational differences on science knowledge

And on each of the 11 questions, those with a postgraduate degree are at least 27 percentage points more likely to choose the correct answer than those with a high school degree or less. These large education differences are consistent with past Center surveys on science knowledge and with the National Science Board’s index of factual science knowledge.

Wide differences in science knowledge on education may reflect greater exposure to science training at higher levels of schooling. People may also encounter science information informally by going to museums or zoos or through participation in science-related activities. A 2017 Pew Research Center survey found that 62% of U.S. adults had encountered science through one of these informal institutions or events in the past year: a national, state or county park (47%); a zoo or aquarium (30%); a science and technology center or museum (18%); a natural history museum (16%); or a science lecture (10%). Those with more education were also more likely to have participated in any of these informal science activities.

News media can also inform people about science and new scientific developments. Most Americans (71%) reported they were at least somewhat interested in science news in the same 2017 Center survey, though 68% of Americans said they were more likely to get science news because they happen to come across it, while 30% said they seek it out. Americans with more education were more likely than those with a high school degree or less education to report that they seek out science news.

Whites are more likely than Hispanics or blacks to score higher on the index. Whites get an average of 7.6 correct out of 11 questions, while Hispanics average 5.1 correct answers and blacks 3.7 correct answers.  Roughly half of whites (48%) are classified as having high science knowledge on the scale, answering at least nine questions correctly, compared with 23% of Hispanics and 9% of blacks.

Black and Hispanic students also tend to score lower on standardized tests on science at the elementary and high school levels, even as these achievement gaps have narrowed over time. And a Pew Research Center analysis of the 2015 National Assessment of Educational Progress found whites were more likely than blacks and Hispanics to express interest in science in high school.

Men tend to score higher than women on science knowledge, but the differences vary across questions

The survey also finds men generally score higher than women on the science knowledge scale. On average, men answer 7.4 questions correctly, while women average 6.0. About half of men (49%) score high on the scale, compared with 30% of women. But gender differences are not consistent across questions.

Science and Engineering Indicators reports over the past several years have suggested that men tend to do better on knowledge of physical science facts while men and women perform about equally on facts related to the life sciences. The Center survey includes only a handful of questions in each domain. Men are more likely than women to answer the four questions related to earth and other physical sciences correctly. Two of the three questions related to life sciences in the survey find men and women are about equally likely to know the correct response. For example, 80% of men and 77% of women correctly say that antibiotic resistance is a major concern of overuse of antibiotics.

These findings are consistent with a 2016 Center survey that used a different science knowledge scale and also found partisans to hold similar levels of science knowledge. That study found a tendency for liberal Democrats and, to a lesser extent, conservative Republicans to score higher on the scale than those in the middle of the political spectrum.

Science knowledge levels are similar by age, although there are some differences across questions on the scale. On average, those ages 65 and older get 7.1 out of 11 questions correct and those ages 18 to 29 get 6.6 correct. In statistical models predicting science knowledge and controlling for gender, race/ethnicity and education, there are no significant differences by age (see Appendix for more details). Past Center surveys also found age patterns in science knowledge tended to vary across questions. Details on education, race and ethnicity, gender, and political party differences are shown in the Appendix.

People’s understanding of scientific processes and how scientific knowledge accumulates may help them navigate ongoing debates over science connected with issues such as climate change, childhood vaccines and genetically modified foods. And on some issues, science knowledge can have a more complicated, indirect role. When it comes to public views about climate and energy issues, partisanship appears to serve as an anchoring point in how people apply their knowledge.