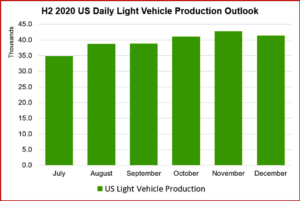 The LMC consultancy says that it does not currently anticipate any excess downtime due to the COVID-19 pandemic, but there is no denying that the risk remains.

It’s tough to ignore the mounting number of cases and the rising death toll unless you are the president. Deaths from the virus have exceeded 1,000 for a week with no end in sight – for the first time since May. Covid cases continue to flood the US with more than 4.6 million people infected with the virus, according to the CDC.

LMC notes that projected regional and export demand, along with inventory replenishment, has it forecast that US automakers will produce nearly 40,000 vehicles daily in the second half of 2020. 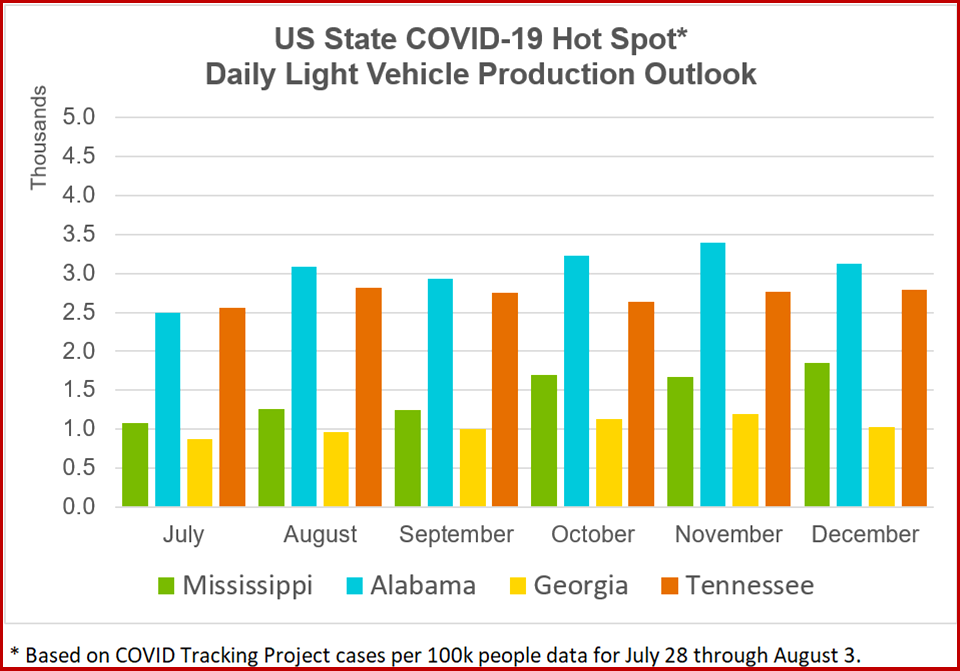 Southern auto plants in COVID hotspots make some very profitable vehicles. But for how long?

“Based on an average plant working week of 5.5 days, a halt of all US production for a week would cost the industry about 220,000 vehicles. In the case of a localized outbreak, with only 20% of the plants suspended, then we would lose roughly 45,000 units of production in that same week,” says. Bill Rinna, Director of Americas Vehicle Forecasts at LMC.

However, not all months are created equal. “the impact of a shutdown would depend upon its timing – from a volume standpoint, a closure in the month of October would be worse than in September, for example.”

Not all plants are created equal either. The suspension of Ford’s Kentucky Truck plant, which builds 1,400 Ford Super Duties, Expeditions and Lincoln Navigators on a daily basis, would have a far greater impact than, say, if production were to be halted at GM’s Orion plant, which builds the Chevrolet Bolt and soon-to-be-discontinued Sonic at a rate of around 250 units a day.

Ken Zino is an auto industry veteran with global experience in print, broadcast and electronic media. He has auto testing, marketing, public relations and communications expertise garnered while working in Asia, Europe and the U.S.
View all posts by Ken Zino →
This entry was posted in economy, manufacturing, news analysis and tagged auto industry commentary, autoinformed, autoinformed.com, Ken Zino, lmc, US Auto Plant Output under Covid 19. Bookmark the permalink.