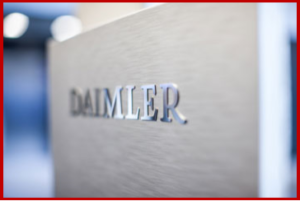 The reorganization at Daimler continued today in Investor Relations and Greater China. Olaf Schick is to take over Finance & Controlling at Daimler Greater China replacing Steffen Hoffman. Hoffmann will take over as Head of Investor Relations on 1 April 2020  with the current head, Björn Scheib, leaving the company by “mutual agreement,” after 11 years in the position. (Daimler Facing Profit and Sales Declines Reorganizes)

It’s just the latest example of the ongoing changes that are being made industry-wide as old-line automakers confront the capital and profit destroying aspects of the emergence of 21st century autonomous and connected vehicles. Earlier it was announced that he CFO of Mercedes-Benz AG, Frank Lindenberg, will leave Daimler and on 31 March 2020 under a sweeping reorganization.

Compounding the problem is that governments will now dictate the designs of vehicles. As part of the so-called Ambition 2039 sustainability offensive, Mercedes-Benz AG plans to make its entire new car product portfolio CO2-neutral. Shorter reporting lines in the new structure will help in this effort, it’s hoped. (BMW Group and Daimler Mobility Hoping to Profit on Joint Ventures. Monetizing a Monopoly or a Joint Survival Bid?, Capital Punishment Day for Auto Workers at Daimler)

Steffen Hoffmann has been Head of Finance & Controlling Greater China since June 2017. From 2011 to 2017, he was a member of the management board of EvoBus and Head of Finance & Controlling Daimler Buses. Previously, he held various management positions, mainly in Daimler’s finance department. Hoffmann joined the then junior management group of Mercedes-Benz AG in 1996 after completing his studies in industrial engineering at the Technical University of Karlsruhe and his MBA at the University of Massachusetts in Dartmouth (USA).

Olaf Schick joined Daimler’s Legal department in 2004. As a lawyer, he was involved in mergers and acquisitions, and from 2010 to 2015, was Head of the Mergers & Acquisitions department at Daimler Greater China. From 2015 to 2017, Schick served as Chief Financial Officer at Mercedes-Benz Russia, before being appointed to the position of Chief Compliance Officer.

“We are positioning the company for the transformation with a clear strategy for the future. The expenditure needed to achieve the CO2 targets require comprehensive measures to increase efficiency in all areas of our company. This also includes streamlining our processes and structures,” said Ola Källenius, Chairman of the Board of Management of Daimler AG and Mercedes-Benz AG late last year.