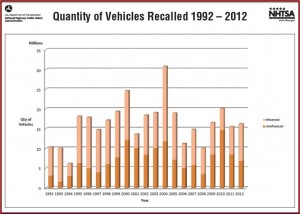 Not a record year for recalls, but still a significant number of vehicles, tires and accessories were found to be potentially dangerous.

The federal auto regulatory agency played a significant role by itself, claiming to have “influenced the recall” usually by opening investigations of more than 9 million vehicles and 60,000 items of vehicle equipment, including tires and child safety seats, in 2012. During the last three years, NHTSA’s defect and compliance investigations have resulted in more than 430 recalls involving 22 million vehicles and products.

NHTSA shares only a tiny part of DOT’s huge $79 billion annual budget, but little of the money is actually allocated to auto safety. This is curious, if not irresponsible, since motor vehicles cause 95% of the nation’s transportation deaths, but mysteriously only 1% of what looks to be a bloated, pork-ridden Transportation budget is allocated to NHTSA. 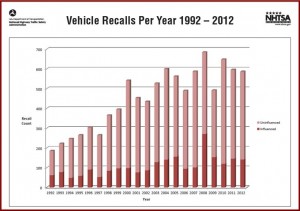 The trend line is up, as electronics and manufacturing defects prompt most recalls. Automotive electronics are the fastest growing cause of customer dissatisfaction.

Worse, the enforcement arm of NHTSA has an annual budget of less than $20 million – laughable in the face of auto companies with hundreds of billions of dollars in annual revenue from vehicle sales and billions in potential legal liabilities. (Read AutoInformed on Toyota to Pay Record $17.35 Million for Lexus Safety Cover-Up and Toyota Settles Lawsuits for $1.1 Billion and Will Modify Millions of Vehicles with Electronically Controlled Gas Pedals to Stop Runaways)

Many recalls are now prompted by consumers and the web. In 2012, NHTSA received 41,912 complaints concerning potential safety defects, 49,417 in 2011, and 65,765 in 2010. With virtually instant feedback available to the world’s largest auto safety agency, automakers are increasingly under pressure to fix defects and institute recalls within five business days as is required by U.S. safety regulations. Slow walking recalls, post Toyota unintended acceleration coverups, is no longer easy, and fines for doing so can total in the millions of dollars.

“The role of the consumer in influencing auto recalls cannot be under-estimated,” said NHTSA Administrator David Strickland. “Consumers are the lifeblood of the recall process and recalls are often the direct result of a government investigation into consumer complaints.”

Since its inception in 1966, the National Highway Traffic Safety Administration has held automakers accountable for recalling vehicles and equipment that have a safety defect or that do not meet the requirements of applicable safety standards set by the agency – resulting in more than 17,000 recalls involving over 500 million vehicles and more than 84 million items of equipment.