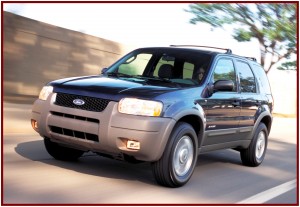 Some of the complaints allege that the failures are related to repairs performed as part of Ford and Mazda safety recalls initiated in 2004 for unintended acceleration.

Ford and Mazda are recalling Escape and Tribute SUVs from the 2001 up to the 2008 model year because a cruise control cable can stick and cause unintended acceleration. Since repair parts are not available, dealers will disconnect the cruise control as an interim measure for the safety defect.

The recall was forced when the National Highway Traffic Safety Administration two weeks ago opened an unintended acceleration investigation on 2001 through 2004 Ford Escape and Mazda Tribute SUVs after receiving 99 reports of unintended acceleration from owners. At least one fatality and nine injures are alleged in multiple accidents. Sixty-eight stuck throttle reports are from Ford Escape owners; thirty-one reports are from owners of Mazda Tributes.

NHTSA itself was prodded into action when the Center for Auto Safety petitioned NHTSA to open defect investigations on the Escape and Tribute models equipped with cruise control. NHTSA opened its own investigation instead, in a move that was forced given the seriousness of the allegations that CAS, funded in part by product liability lawyers, was publicizing.

Some of the stuck throttle complaints, including a fatal crash in January 2012, allege that the failure was caused by interference between the speed control cable and a cover at the throttle body cam. Some of the complaints also allege that the failures are related to repairs performed as part of Ford and Mazda safety recalls initiated in 2004 for unintended acceleration.

Ford is also now in the process of recalling the redesigned 2013 Escape because carpeting can interfere with the accelerator and brake pedals, and also for engine fires.