More Than 77 Million People Enrolled in US Schools 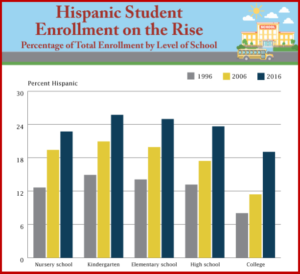 The number of people enrolled in U.S. schools increased to 77.2 million in 2016, according to the U.S. Census Bureau. Since 1996, total school enrollment has grown 9.9%. Virtually all the increase came from college enrollments.

The number enrolled in high school remained steady between 2011 and 2016 – good on the face of it, but a problem for the skilled trades – including automotive, since many high schools have dropped vocational training, emphasizing health care or college prep instead of industrial vocations. As a result, manufacturing companies are instituting German-style apprenticeship programs. (Mercedes-Benz Starts Apprenticeship Program with U.S. Department of Veterans Affairs)

Enrollment in kindergarten through eighth grade has not significantly changed during the past decade, increasing from 36.1 million in 2006 to 36.6 million a decade later. This is the beginning of a problem Japan has had for decades – an aging population with no younger workers in the pipeline placing great financial stress on social, medical and retirement programs. These 2016 figures show that non-Hispanic whites made up nearly 51% of all students in kindergarten through eighth grade, while Hispanic or Latino students made up 25.1%. Black students were 15.1% of the total; Asian students were 5.4%

The number of Hispanic students at all levels of school has grown by 4.8 million in the past decade (2006 to 2016), and by 9.0 million since 1996. This represents a doubling of the Hispanic student population in the last 20 years, a 102% increase.

The updated tables provide information by age, sex, race, Hispanic origin, family income, type of college, employment status, nativity, foreign-born parentage, attendance status (full or part time), type of school (public or private), and vocational course enrollment. They also delve into topics such as nursery school and kindergarten enrollment, the likelihood of enrollment in a grade appropriate for their age, and the percentage of young adults enrolled in college. Historical time series tables and visualizations are also provided.

School enrollment data are obtained from the Current Population Survey (CPS). The Current Population Survey is the primary source of labor force statistics for the population of the United States and is used to collect data for a variety of other studies that keep the nation informed of the economic and social well-being of its people. Whether politicians, school districts or policy makers act on it is another matter entirely. Later this fall, the Census Bureau will release a post-secondary school enrollment report.