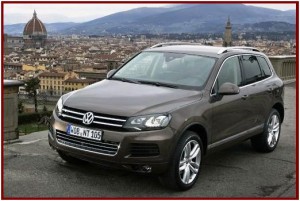 The Touareg Hybrid with a V6 diesel engine and eight-speed auto transmission is rated at 20 mpg city, 24 highway and 21 mpg combined, which is likely the most accurate real world number.

A new Hybrid Scorecard rating system covering 2011 models shows that many have impressive fuel economy savings, along with corresponding emissions reductions. Nine of the 10 top-selling hybrids from January through April in the U.S. return more than 30 mpg and score above average for environmental improvement and value.

However, only 13 of the 34 hybrids reviewed cut more than 25% of the global warming gases emitted by their conventional vehicle counterparts. The worst offender, according to the pressure group the Union of Concerned Scientists, is Volkswagen Tuareg Hybrid, which emits only 10% less, an all-time low on the scorecard, which values fuel economy above all else. Car buyers of course have many reasons for purchasing a vehicle, with economy as only one factor.

The pressure group also criticized the new Porsche Cayenne Hybrid and BMW’s X6 and 750i Active Hybrids as among the worst-rated hybrids for environmental improvement because, like the German VW Touareg, they too emphasize power over economy in their design. UCS is apparently unaware of the long standing performance marketing positioning of German brands.

All this comes from the latest UCS Hybrid Scorecard released this week, which rated hybrids for fuel efficiency, environmental improvement, consumer value, and the so-called “forced features” automakers install that increase the cost and profitability of some models. Hybrid systems are expensive and complicated to engineer so it’s natural that automakers, particularly those trailing world leading Toyota in their production, want to increase revenues if possible on them.

As mentioned in previous Hybrid Scorecards, the cost of many hybrids is increased by what UCS considers “forced features,” including premium sound systems, heated seats, and leather trim that inflate the cost without adding to fuel savings or reducing emissions. These additional features, which on average cost more than $2,500, mask the real value of hybrid technology and push cost-conscious hybrid buyers out of the market, UCS claims.

This fractured logic of “forced features” is beyond me. If they were really discouraging to hybrid buyers, why wouldn’t they go elsewhere? And isn’t any improvement in fuel economy an improvement to be lauded? And what’s the matter with letting the market sort this out?

“If automakers are serious about selling hybrids and offering fuel efficiency at a fair price, they should ditch forced features,” said Don Anair, a senior UCS engineer and the scorecard’s author. The Lincoln MKZ, a luxury model, and the Hyundai Sonata, a non-luxury hybrid, are available with few or no forced features, he said, and “there should be a lot more.”

The Prius remained the top non-luxury model in the scorecard’s environmental improvement category, delivering a more than 40% reduction in global warming pollution compared with its closest conventional models. The combination of the Prius’ high fuel economy, good value, and relatively small number of forced features help make it the best-selling hybrid, accounting for about half of all hybrid sales. Other non-luxury models scoring high on environmental improvement included the Ford Fusion Hybrid, Honda Civic Hybrid and Toyota Highlander Hybrid.

In the luxury segment, the Lincoln MKZ Hybrid and Lexus CT200h earned top environmental improvement scores. Like the Prius, they cut global warming emissions by more than 40% compared to their conventional luxury counterparts. Ford and Lexus were able to accomplish this by downsizing the vehicles’ engines from six to four cylinders to maximize fuel economy, a strategy that resulted in UCS’s strong ratings.

These standards are based on reducing emissions ranging from 3% to 6% per year, the same as increasing fuel mileage equivalent amounts. The highest increase under consideration, 6% per year, will raise the Corporate Average Fuel Economy (CAFE) from 35.5 mpg in 2016 to 60 mpg in 2025. It’s important to note that these are not EPA rating numbers on the windows because of how CAFE is computed. EPA ratings for a 60 mpg CAFE vehicle will be about 25% to 43% less.

There’s a problem though one that hurts the environment. Some of the proposed changes to increase fuel economy and decrease greenhouse gases could cost new car buyers from $3,700 to more than $9,000 per vehicle if they are adopted, and that’s before another $1,500 or so is added for additional safety equipment. If buyers hold onto their old cars, air quality will increase.