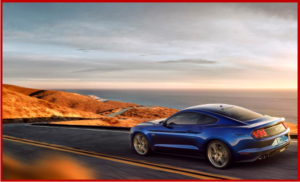 Ford says its Mustang has been the best-selling sports car in the United States during the last 50 years, and now the original pony car is the most popular sports car globally, according to its interpretation of IHS new vehicle registration data. During 2016 more than 150,000 Mustangs were sold, with global sales increasing 6% compared to 2015 with ~45,000 Mustangs sold outside the United States.(Freshened Ford Mustang Shown in Los Angeles)

Mustang’s growth came from sales gains in Germany and China, as well as the car’s introduction to New Caledonia, Gibraltar and Bonaire. Since launching in China in 2015, Mustang has become the best-selling sports car in the world’s biggest auto market. Sales in 2016 were up 74% over 2015 it’s claimed.

This gets into murky marketing claims:

Ford says that ~395,000 sixth-generation Mustangs have been produced at Flat Rock Assembly Plant (Michigan) since 2015 and of that, 98,000 have been shipped to customers outside of the United States. From 2015 to 2016, Ford doubled the percentage of exports to 17.5%. The Dearborn-based automaker – largely known for truck and SUV sales – predicts export growth will continue to 30% for the 2017 Mustang.

Mustang is now available in 140 countries across all continents other than Antarctica. This year, availability of the 2018 Mustang will expand to six new countries, including Brazil, the Palau Islands and the Ivory Coast, with three additional markets to be announced later.

For 2018, on sale this fall, Mustang will be mildly updated with new front and rear looks, and optional 12-inch all-digital instrument panel, and a 10-speed automatic transmission,