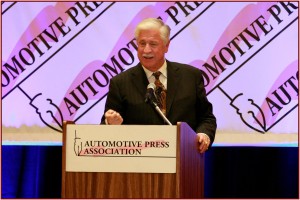 As chairman of NADA, Wade said he wants to stop the cycle of dealers pressing state legislatures for protection against factories, which in turn has automakers countering with their own bills.

Factory authorized auto dealers need less financial pressure, not more during the ongoing Great Recession and jobless recovery, and automakers, including the ones who survived on taxpayer largesse, are doing the opposite.

“Each year dealers collectively invest billions of dollars in facility upgrades, much of it mandated by the auto manufacturers,” said Stephen W. Wade, chairman of the National Automobile Dealers Association while speaking to the Automotive Press Association in Detroit.

In normal times this would be a classic dealer versus automaker squabble. However, with consumers strapped, long term unemployment at record Great Depression highs and the economic recovery tenuous at best – if it is occurring at all – the affordability of new vehicles is at stake.

New car and truck dealers employ more than a million people in the U.S. and help create  20% of the national retail based economy as auto sales remain depressed in at 10 million retail units annually, down from 16-17 million units before 2008.

“These costs have a significant impact on dealer balance sheets, in many cases severely straining them and in some cases even persuading a dealer to leave the business rather than commit such large sum, Wade said to APA, after he participated in business meeting with the Detroit Auto Dealers Association, which runs the North American International Auto Show –  or NAIAS.

Wade said one issue that comes up repeatedly when meeting with dealers across the country, regardless of dealership size or brand, is the widespread frustration dealers have with their manufacturer’s dealership image programs. NADA represents nearly 16,000 new-car and -truck dealerships with 32,500 franchises, both domestic and international.

“Surprisingly, little hard evidence exists as to the return-on-investment, either to the automaker or to the dealer,” said Wade, a multi-franchise dealer in Utah and California.

Seeking an objective or at least now automaker analysis, NADA has commissioned a study to determine both the positive and negative factors that drive the return-on-investment of facility image programs.

“The goal is to move the facilities-investment decision onto a rational, informed and fact-driven footing,” Wade said. “The study’s findings will be of use to dealers and automakers alike, by moving the debate away from opinion and assertion toward objective facts and data.”

The study is being conducted by Glenn Mercer, a former partner with McKinsey and Company, and is expected to be completed by the end of the year.

As chairman  of NADA the affable Wade said he wanted to stop the cycle of dealers pressing individual state legislatures for protection against factories, which in turn has automakers countering with their own bills. That way automakers and dealers can concentrate their energy on selling new vehicles.

Wade said that when one of his dealerships sells a new car and the customers are satisfied, he’ not sure if they remember what color the floor tile was.

What a concept… and it might save you money on your next vehicle.