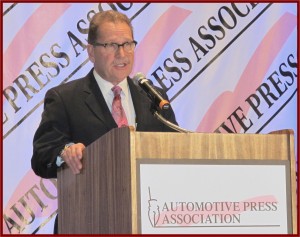 “Simply put, these unfair programs are bad for dealers, bad for automakers, and bad for customers.”

The new chairman of the National Automobile Dealers Association, Bill Underriner, said today that automakers need to stop intruding into dealerships. After noting the Tigers are back in the World Series at the Automotive Press Association in Detroit, he said there’s “good energy here. The auto industry is doing its part to lead the economic recovery. But we still have a long way to go – not just here but all around the country. Auto sales are up, but financial pressures are too…especially on dealerships.”

The culprit is so-called two-tier pricing, according to Underriner, which is a symptom of a bigger overall problem, “manufacturer intrusion into dealers’ businesses.” NADA wants the automakers to stop “unfair practices.” In his view, the pricing scheme, aka stair-step incentives, destroys consumer confidence in dealers and automakers.

Since NADA represents nearly 16,000 new-car and -truck dealers, with 32,500 franchises, both domestic and international, it is a political force to be reckoned with, especially at the local level. NADA members employ one million people, and generate 14% of  the U.S.’s sales tax revenue. The muscle was evident during the General Motors bankruptcy and reorganization when it was forced to reinstate many dealers it had cancelled because of NADA political pressure in Congress. What effect NADA can have on the marketing practices of automakers remains to be seen.

NADA is concentrating its resources. This summer, NADA created a special dealer task force to focus on the fairness of two-tier pricing, which is a manufacturer-to-dealer incentive tied to sales volume goals. Smaller dealers can be at a disadvantage of more than a $1,000 per car under such a program. It’s hard to see how this hurts shoppers.

“The history of our industry is littered with automaker attempts to impose one-size-fits-all programs on dealers. These efforts at top-down control almost always fail,” said Underriner, a Buick, Honda, Hyundai and Volvo dealer in Billings, Montana. “We favor lawful, equal and fair treatment by a manufacturer for all its dealers. Unfortunately, history shows that, at times, manufacturers create incentive programs that favor some dealers over others.”

Underriner cited the “incredible diversity among dealer businesses” as a reason why these programs are often unsuccessful. Dealerships range from being publicly traded or privately owned to mass-market or single-point dealers competing in distinct urban and rural regions of the country.

In Underriner’s opinion, corporations simply cannot understand or respond effectively to local conditions. “We know our customers’ preferences better than anyone – certainly far better than a corporation with headquarters thousands of miles away.”