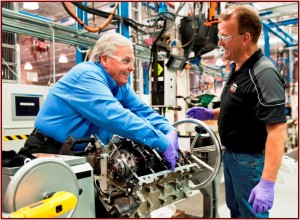 Under the guidance of GM’s Rich McBride (right), Rick Hendrick builds the engine that will go into his new Chevrolet Corvette Z06 Carbon Edition.

One of most famous team owners in NASCAR racing, Rick Hendrick, built his own 7.0-liter V8 engine that will eventually be installed into his new Corvette Z06 as it rolls down the assembly line in Bowling Green, Kentucky.

Hendrick is one of the growing number of prospective Corvette owners who are paying Chevrolet to build a high performance LS7 of LS V8 engine at the General Motors’ Performance Build Center in Wixom, Michigan.

The so called Engine Build Experience is a $5,800 option when a customer purchases a new Corvette Z06 or ZR1. Yes, you pay more to get your hands dirty by helping to assemble your $100,000 Corvette – there’s marketing genius here, along with owners who like finely crafted machinery.

The PBC option includes lodging, local transportation and a concierge, who helps coordinate arrangements, including the scheduling of the build and the customer’s activities at the build center. Travel to and from Detroit is the customer’s responsibility, but the concierge can help with booking.

Hendrick is the 13th participant to build his own engine at the build center, in this case a 505 horsepower LS7 V8. The engines are covered by Chevrolet’s five-year, 100,000-mile transferable powertrain warranty.

“As a Chevy enthusiast and lifelong gearhead, having the chance to experience GM’s hand-build engine assembly is a real privilege,” said Hendrick, owner of Hendrick Motorsports. “I want to thank everyone at the Performance Build Center for this opportunity. It’s incredible to spend time with the people here and see first-hand these processes that produce some of the best engines in the world.”

After the engine is assembled, a personalized nameplate is added to the engine next to the builder’s name. The engine is then shipped to the Corvette assembly plant for installation in the customer’s car.

In addition to building their own engines, Corvette buyers can attend driving school in Arizona or Nevada, take delivery of their vehicles at the National Corvette Museum or watch their vehicles being built at the Corvette assembly plant in Bowling Green.