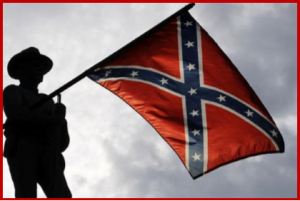 It’s time to act upon and renew our vigorous pursuit of the principles we fought the Civil War over.

In a move of considerable courage,  but in keeping with the best American traditions, and with God on their side, NASCAR is actively discouraging the display of the blatantly racist Confederate flag in every aspect of the sport.

In a statement released yesterday, one of our most formidable racing institutions with deep roots and heritage in the South said as a group of race venues: “As members of the NASCAR industry, we join NASCAR in the desire to make our events among the most fan-friendly, welcoming environments in all of sports and entertainment.

“To do that, we are asking our fans and partners to join us in a renewed effort to create an all-inclusive, even more welcoming atmosphere for all who attend our events. This will include the request to refrain from displaying the Confederate Flag at our facilities and NASCAR events.

“We are committed to providing a welcoming atmosphere free of offensive symbols. This is an opportunity for NASCAR Nation to demonstrate its sense of mutual respect and acceptance for all who attend our events while collectively sharing the tremendous experience of NASCAR racing.”