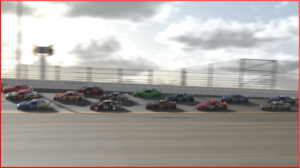 The fan base of NASCAR has been severely threatened – medically, economically – by the ongoing lack of US preparedness and actions around COVID-19. Click to Enlarge the simulation.

In February when NASCAR was still in deep denial about the gravity of the Corona crisis, it and Penn Interactive announced a new multi-year partnership that led to the creation of a brand new, free-to-play, mobile game dubbed NASCAR Finish Line. It offered users the chance to win a $50,000 jackpot every race. Now, today in absence of real racing, the app is being relaunched to include eNASCAR contests. (NASCAR Still Racing So Far, Buffers and Restrictions Added, NASCAR Bans Fans at Races, NASCAR Ends Denial of COVID-19 Pandemic, eNASCAR iRacing Pro Invitational Series to Bootup)

Along with the launch of the game, Penn also announced that it would serve as the entitlement sponsor of the upcoming eNASCAR iRacing.com Pro Invitational Series event from virtual Dover International Speedway on Sunday 3 May 3.. The event will be entitled by the eNASCAR Finish Line app. It also will have special integration from Barstool Sports’ personalities – with more details to come at a later date.

“During this time of uncertainty, eNASCAR has provided sports fans around the world with an exciting form of sports entertainment that is helping restore some normalcy to the weekend,” claimed Scott Warfield, NASCAR managing director of gaming. “Now… fans can foster an even deeper connection with the new series and have even more incentive to tune into eNASCAR on FOX and FS1.”

The newly relaunched eNASCAR Finish Line mobile game is available on iOS and Android phones and tablets and can be downloaded on the App Store and Google Play store. Players can win a $5,000 jackpot by accurately predicting the top two finishers and the highest finishers across six different groupings of four drivers.

(eNASCAR.com has been updated to reflect the addition of the eNASCAR iRacing.com Pro Invitational Series – providing fans with a centralized hub for information)