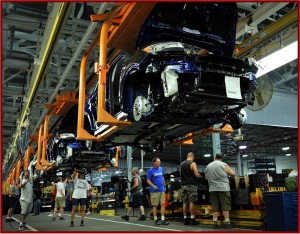 Ford Motor Company employees, dealers and suppliers today celebrated the production of the all-new 2013 Ford Escape at the Louisville Assembly Plant. Ford spent $600 million – with the help of federal taxpayer subsidies from the Department of Energy –  to convert Louisville from a plant producing only body-on-frame SUVs into a facility that can build unit body small utilities. Kansas City, which previously built the older Mazda-derived Escape, is being converted to Transit production.

The upgraded plant is in theory capable of making up to six different vehicles at the same time, thus it is Ford’s most flexible U.S. plant. Louisville is also one of 11 Ford facilities in the U.S. that is participating in the Advanced Technology Vehicles Manufacturing Loan Program – in Ford’s case almost $6 billion total – initiated by Congress under the Obama administration, which also put $80 billion into other auto bailouts, including the forced and politically contentious bankruptcies of Chrysler and GM.

The Louisville-built Escape is the first of the new line of compact SUVs built off Ford’s global C-car or Focus platform now that Ford and Mazda have gone separate ways. The same Escape will be built and sold in Europe and China, where it is called Kuga, although there will be unique powertrains and other minor tweaks for customers in those markets. In the U.S., it’s priced roughly from $23,000 to more than $38,000.

However, the all-new 2013 Mazda CX-5 is also a compact crossover SUV that offers the best highway fuel economy of any SUV sold in North America, at 35 mpg, and also has at the moment a valid claim of class-leading overall fuel economy versus its direct competitors.

The badly named, but brilliantly designed, Mazda Skyactiv-G 2.0-liter gasoline engine with its 13:1 compression ratio – world’s highest for a mass-produced vehicle – is largely responsible for the fuel efficiency. This is an old hot rodders trick – more compression means more expansion when the mixture explodes, thereby increasing output. Along with an all-new 4-2-1 exhaust system and redesigned pistons and other components, problems associated with high compression engines, notably,  spark knocking and operation on 87-octane fuel instead of more expensive premium fuel – were solved. (The EcoBoost engines are at 9.3:1 or 10:1 and require premium fuel.)

As a result, the Mazda engine is 10% lighter, delivers more torque, improves fuel economy and lowers emissions when compared to the MZR 2.0-liter gasoline engine it replaced. It also doesn’t use expensive turbocharging and intercoolers to get its high specific output, providing a potential initial cost advantage, which may or may not be passed onto buyers in this high demand segment. There are as well as longer term lower cost of ownership advantages in fuel prices alone, to say nothing of service and repair costs. The CX-5 starts at a little over $24,000 and goes to more than $34,000 for fully loaded models.

Ford installed new tooling and improved equipment in Louisville’s final assembly area and body shop, including more than 1,000 robots that don’t pay UAW dues and 20 miles of conveyors. Reprogrammable tooling in the body shop allows the plant to produce multiple vehicle models at the same time without requiring downtime for tooling changeover.  Ten years ago, there were more than 102,000 UAW jobs at Ford. Today there are 40,000.

Ford already has added 1,800 jobs at Louisville Assembly Plant and is adding 1,300 additional workers to a third shift this fall, in an attempt to catch up with a recovering U.S. auto market that is leaving it behind because of  previous cutbacks. Total hourly employment at the plant will reach 4,200 this year. Ford is also making much of the claim that it is on pace to deliver more than half of the 12,000 new U.S. hourly jobs it committed to add by 2015 under its last UAW contract. Actually, of  that total, only 3,400 are projected to be new hires. (See Ford Cuts Summer Shutdown in North America as Lack of Capacity is Hurting Sales and Share in Recovering Market and Ford UAW Workers Ratify 4-Year No Cost Increase Contract)