Posted on 1 November 2012 by Kenneth Zino 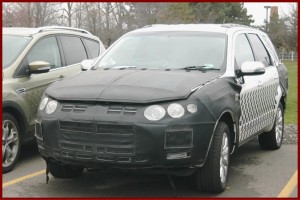 A 2013 Escape is next to this Lincoln derivative or clone?

Look at what Lincoln is planning for the small SUV market of 2014. This baby Lincoln prototype is obviously based on the all-new 2013 Ford Escape architecture – wheelbase, drivetrain, 2-/4-wheel drive, 5-place seating, and maybe a turbocharged four-cylinder engine, with its alleged fuel economy advantages?

Ford Motor appears to be set in its ways by continuing to move Lincoln in the direction of the now defunct Mercury brand – shades of the compact Mariner – with this derivative. It used to be that Mercury’s were Fords with more chrome and a $500 price increase. Now it’s Lincoln’s turn. This follows the Ford Fusion-derived MKZ sedan that is just now entering production, which is in essence a more expensive replacement (Ford hopes) for Mercury Milan, which is now enjoying the big sleep along with the rest of the dead brand. 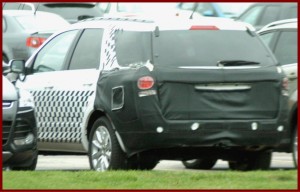 Lincoln sales dropped 15% to 5,100 units in October.  Lincoln without a clear image and only a local presence remains a hobby not a business at FMC with year-to-date sales of 69,000.

Styling tweaks are attempting to set this new model apart from current Lincolns as well as the Ford Escape. These include a departure from the wing-shaped waterfall grille opening used on cars, with the grille itself patterned after the super-sized Lincoln Navigator\ truck.

There is also a squared off rear cargo area in place of the curved roof of the Escape. Projector headlights and upscale wheels are also attempts to say this is an upmarket design. Is it?