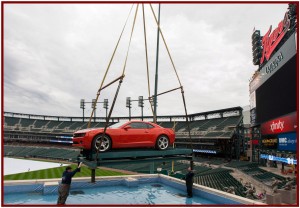 Red Smith said don't write your lead on the way to the ballpark, but the Tigers and the Detroit Three automakers should have a good year.

As the 2012 major league baseball season begins, Chevrolet is using Justin Verlander and Prince Fielder of the Detroit Tigers in 15-second spots that are a remake of the now classic 1974 “Baseball, Hot Dogs, Apple Pie and Chevrolet” TV ad.

Two of three 15-second ads are scheduled to debut Wednesday on ESPN during the Opening Night game at Miami against World Series winner St. Louis, with presumably Verlander’s being held if possible for opening day in Detroit tomorrow when the Tigers with Verlander on the mound take on the no-longer-Babe-Ruth-trade-cursed Boston Red Sox. Unfortunately, the ESPN broadcast is blacked out in Michigan for the Tigers opener.

Detroit Tigers pitcher and 2011 American League Cy Young Award winner Justin Verlander and first baseman Prince Fielder, son of former tiger slugger Cecil who was signed as a free agent by Detroit from Milwaukee in the off-season, attempt to sing in the ads.

Chevrolet has been the “Official Vehicle of Major League Baseball” since 2005, and, with its dealers, has helped sponsor youth baseball at the grassroots level since 2006 through the Chevrolet Youth Baseball program, and community baseball field makeovers through the Diamonds & Dreams program since 2010.

1 Response to New Chevrolet Ads with Verlander, Fielder for 2012 Season