New Fiat 500 Debuts at the Quirinale and Palazzo Chigi 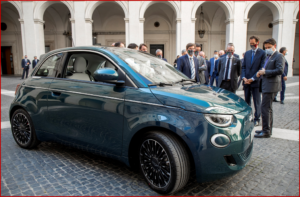 The New 500 made its institutional debut at the Palazzo del Quirinale, where Fiat Chrysler Automobiles full-electric car was presented to the President of the Italian Republic, Sergio Mattarella, by John Elkann, Chairman of FCA. FCA Management then traveled to Palazzo Chigi to present the New 500 to Giuseppe Conte, the Italian Prime Minister.

The New 500 BEV was created, designed and engineered in Turin. “Just another shining example of the creativity and innovation of which the company and the city – where Fiat was founded over 120 years ago – are proud,” FCA said.

FCA then listed all the e-Mobility initiatives created at the Mirafiori complex. These include the Vehicle-to-Grid (V2G) pilot project, which – once fully completed – will be the largest plant of its kind in the world.  By the end of 2021, the infrastructure will have the capacity to interconnect up to 700 electric vehicles, capable of providing ultrafast grid services to the transmission network operator, as well as recharging the vehicles themselves.

Later at Palazzo Chigi, FCA asserted its commitment to implementing a broad investment plan for Italy, much of which has already been launched in domestic plants. The plan is based on a transformation of the Italian automotive industry with a view to a low-emissions future, powered by increasingly connected hybrid and electric vehicles.

“To picture the future of the 500, the Fiat brand started from what made it what it is today. The same was true of the first generation, which offered mobility and freedom in the ’60s. The 500 represented a sea change, a car always on the crest of the wave, and has established itself as an icon since its debut 63 years ago. With the 2007 second generation, the Fiat 500 became an exemplar of the Italian fashion and style that have conquered the world. And now, at a time when mobility is expected to be more sustainable, connected and autonomous, the third generation of the Fiat 500 is once again to the fore, bringing with it design and driving pleasure, along with its symbolic value, exceptional styling and strong character, which have become a firm part of the collective unconscious,” FCA said.