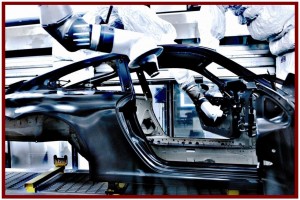 “What Porsche is doing here is reconciling economy and ecology, creating leading-edge jobs for specialist experts, thereby bolstering this world-famous location over the long-term,” said Müller.

The opening of the new paint shop this week in Zuffenhausen coincides with the start of production of the new Porsche 911, arguably the most famous sports car in the world since its 1964 début. The revised 911 bodies are painted inside and out in a dust free environment at the enclosed plant, which is located in a densely populated urban area of Stuttgart.

In keeping with current industry practices there’s a new electrostatic paint droplet removal system and a wet-chemical exhaust air purification to keep emissions minimal. In fact, the emissions are so little – orders of magnitude under the regulatory requirements – that the usual 60-meter-high paint exhaust stack is eliminated from the new building. Porsche also claims 70% air recirculation, which in turn means decreased energy consumption.

“The new paint shop is typically Porsche. As is so often the case, we are pushing back the previously prevailing technological boundaries, breaking new scientific ground and pioneering inventions that subsequently serve the common good,” said Matthias Müller, Porsche AG’s Chairman of the Board of Management at the dedication ceremony.

The 192 meter long and 52 meter wide paint shop building is where the body shells of the Porsche 911 and Boxster/Cayman model lines receive their anti-corrosion protection, are painted and surface-sealed in a multistage process.

In building the plant, in which approximately €200 million euro was invested. Dürr AG was the prime contractor, outfitting the paint lines with the latest spraying and application technologies, dryers for hardening the paint as well as control and conveyor technology. Eisenmann provided the pre-treatment system and a cathodic dip-coating plant, together with new conveyor technology and the electrostatic paint droplet removal system. 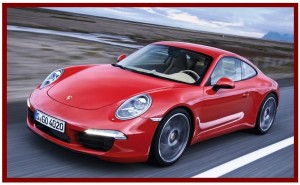 The most famous sports car in the world, except for arguably the Corvette, is built in an urban area.

With a longer wheelbase of almost 4 inches, and slightly reduced height, the 911 remains instantly recognizable. A new aluminum and steel body translates to a weight reduction of 45 kilograms.

Both the 911 Carrera and Carrera S increase performance and are, slightly, more efficient. All versions consume less than ten liters of fuel per 100 kilometers (that’s ~23 mpg). Fuel consumption and emissions are about 16% lower compared with predecessors, according to Porsche. Efficiency is helped by a start/stop system and what appears to be the world’s first seven-speed manual transaxle. The new electro-mechanical power steering – sure to be controversial among enthusiasts – has what Porsche claims is “precision and feedback,” while reducing fuel-consumption.