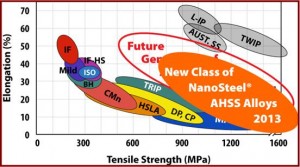 GM is claiming that a new steel offers an alternative to other lightweight materials, which may cost more and require extensive retooling for production.

The third generation of upcoming advanced steel grades will meet vehicle safety and performance requirements while generating lower greenhouse gas emissions compared to other materials at a competitive cost, according to John Surma, chairman and CEO of United States Steel Corporation. At an Automotive Press Association meeting today in Detroit, Surma said upcoming all new steel grades will play a “critical role in evolving automotive designs to meet the 2025 54.5 mpg mandate.”

While not without self-interest and counterclaims from the aluminum industry, Surma’s assertions are backed by examples, including a steel industry program that he said demonstrated new steels and design methods that can reduce body-in-white mass by 39% using components that are up to five times stronger compared to traditional steel bodies. A reduction in life cycle emissions of  nearly 70% without a cost increase was also claimed.

Surma also cited a project in which a front lower control arm made from an alternative material was replaced with an advanced high-strength steels part of the same weight at 30%. While the alloys cost more per pound, they are stronger and when coupled with a redesign of the component to make it lighter, the cost can often be the same or less than a conventional steel part.

Part of the steel industry’s problem, aside from the overall lack of interest among technically illiterate consumers, is regulatory. While the Obama Administration is in the process of implementing the most stringent emissions and fuel economy standards in history, the Environmental Protection Agency only looks at a crude mile per gallon rating that does not take into effect the energy used and greenhouse gas emissions that result during the creation of the 10,000 or more components that comprise an automobile.

The U.S. Department of Energy has given the steel industry $6 million for a so-called “Integrated Computational Materials Engineering Approach to Development of Lightweight, Third-Generation Advanced High-Strength Steels” project. The four-year program began earlier this year and will develop computer models to accelerate the development of the next generation of weight-saving high-strength products.  Along with steel companies and car companies, five universities, two engineering companies and Pacific Northwest National Laboratory will participate in the research.

“The program will start from atomic and nano scale models of steel and continue through the performance of these steels in actual vehicles,” Surma said.