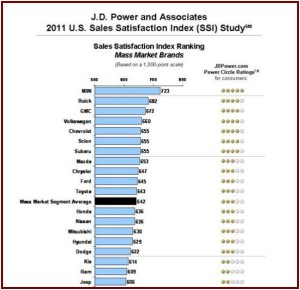 Calling Mini a mass market brand could be misleading since BMW owns it and transaction prices are far higher than other same size cars.

Satisfaction with the new-vehicle sales process has improved from 2010, according to a new study released today. All sales satisfaction measures improved “notably” from 2010, with the greatest increase in the delivery process, despite the fact that the average length of time to complete the delivery portion of a new-vehicle sale has increased by four minutes to an average of 32 minutes in 2011.

Among buyers, satisfaction is examined across four measures (listed in order of importance):

Among rejecters, satisfaction is examined across five measures: 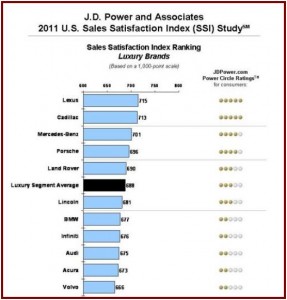 Lexus ranks highest among luxury brands in satisfaction with the new-vehicle buying experience. Cadillac and Mercedes-Benz follow in the luxury-brand segment rankings.

Power said the reason for the lengthened delivery process is the increasing proportion of buyers who are receiving more in-depth demonstrations of technology in their new vehicle (including audio, entertainment, navigation and communications systems). About 88% of buyers in 2011 say they received a technology demonstration at vehicle delivery.

“Although technology demonstrations add time to the delivery process, those explanations substantially improve satisfaction, as well as customer loyalty and advocacy,” said Jim Gaz, director of automotive research at J.D. Power and Associates.

The 2011 U.S. Sales Satisfaction Index (SSI) Study is based on responses from 24,045 buyers who purchased or leased their new vehicle in May 2011. The study was fielded between August and October 2011.