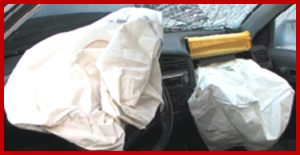 The U.S. Department of Transportation’s National Highway Traffic Safety Administration – aka NHTSA – issued an amended order late Friday to continue the acceleration of recall repairs for millions of U.S. vehicles equipped with  deadly Takata air bag inflators. The so-called Amended Coordinated Remedy Order sets requirements for when automakers must have replacement parts available for customers and sets progress and completion deadlines for the changing out of the defective Takata parts which are responsible for 11 deaths and ~180 injuries in the United States. This is the largest and most complex safety recall in U.S. history.

There are currently 46 million recalled Takata air bag inflators installed in 29 million vehicles in the United States. A combination of time, environmental moisture and cycling high temperatures contribute to the degradation of the ammonium nitrate propellant – the explosive – in the inflators. Degradation can cause the propellant to burn too quickly, rupturing the inflator module and sending shrapnel through the air bag and into the vehicle’s cabin.

The Amended Coordinated Remedy Order issued to Takata and 19 affected automakers requires replacement parts to be obtained on an accelerated basis and made available first to the riskiest vehicles. The order sets new requirements for automakers to certify to NHTSA when they have obtained a sufficient supply of replacement parts to begin repairs It also requires automakers to coordinate consumer messaging using best practices identified by NHTSA, industry and the independent monitoring of Takata and the Coordinated Remedy Program.

This latest move is an outgrowth of the Coordinated Remedy Program initiated in November 2015. It now includes an additional tens of millions of inflators recalled or scheduled for future recall since that date, most of which were included in the May 2016 recall expansion. ( NHTSA Whacks Takata with $70-200 Million Consent Order and NHTSA Expands Takata Airbag Inflator Recall by 40 Million)

“NHTSA is doing everything possible to make sure that there are no more preventable injuries or deaths because of these dangerous air bag inflators,” claimed NHTSA Administrator Dr. Mark Rosekind. “All vehicle owners should regularly check their vehicles for recalls at SaferCar.gov and go get them fixed at no cost as soon as replacement parts are available.”

Under the Amended Consent Order issued to Takata in May 2016, automakers are to recall additional inflators over the next three years, ultimately affecting approximately 64 to 69 million inflators in 42 million recalled vehicles. Ultimately, all frontal Takata inflators using non-desiccated, phase-stabilized ammonium nitrate (PSAN) will be recalled. The full list of vehicles that are currently affected or will be affected by future Takata recalls is available here.

Under the Coordinated Remedy Program, NHTSA has committed to seeking a 100% recall completion rate from the vehicle manufacturers. As of 2 December, automakers reported they have so far repaired only 12.5 million inflators.

AutoInformed thinks that a 100% recall completion rate is sheer folly, given the history of safety recalls and the lack of a national registration system to track current vehicle owners. NHTSA is apparently hoping to use public relations and traditional media outlets to raise awareness of the problem, hoping – against previous recall completion rates – that all the vehicles will be fixed.

Before establishing the schedule for the expanded Takata inflator recalls announced in May 2016, NHTSA and its independent expert reviewed the findings of three research organizations into the Takata air bag ruptures and confirmed the findings on the root cause of inflator ruptures. The recall and remedy schedule mandated by NHTSA – it claims – ensures that vehicles with defective air bag inflators are recalled and automakers have replacement parts available before they present a significant risk to vehicle occupants. This is the largest and most complex safety recall in U.S. history.

NHTSA, to be fair, has worked to increase consumer awareness of the recalls and encourage vehicle owners with open recalls to act. The Agency launched its Safe Cars Save Lives campaign in January, and conducted a five-state, ten-city bus tour  through the highest risk areas for Takata air bag ruptures to find vehicle owners with open recalls and raise awareness of the SaferCar.gov.

The Takata recalls currently cover frontal inflators that do not include a chemical desiccant that absorbs moisture. There have been no reported ruptures of desiccated inflators due to propellant degradation. Under the Amended Coordinated Remedy Order and the May 2016 Consent Order, Takata and automakers that use desiccated PSAN inflators are required to research their safety. Absent proof that the desiccated PSAN inflators are safe, they will also be subject to recall. Takata is required to prove the safety of these inflators by the end of 2019.