Nissan Chairman Carlos Ghosn Arrested and About to be Sacked by Board for Financial Misconduct. Renault-Nissan-Mitsubishi Alliance Position Threatened. 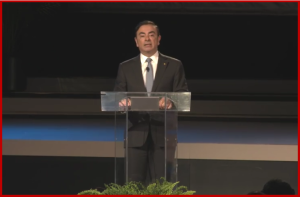 Did he think he could get away with it?

Based on a claimed whistle-blower report, Nissan Motor Co has been conducting an internal investigation over the past several months regarding misconduct by Chairman Carlos Ghosn and Representative Director Greg Kelly, Nissan said today.

This statement came as Carlos Ghosn was about to be arrested for under-reporting compensation in Tokyo Stock Exchange filings to avoid paying higher taxes. Japanese authorities, we think, can hold him 22 days without charge or bail.

Ghosn’s position as chief executive of the Renault-Nissan-Mitsubishi Alliance is now under fire. Ghosn retired from the highest job at Nissan last year, but remained as head of the world’s largest automotive alliance, saying he planned on staying until 2020. Ghosn was paid ¥227 million in cash and stock options by Mitsubishi Motors in 2017.

Ghosn – considered one of the top global automaker executives was widely heralded for saving Nissan from bankruptcy starting during the last century in 1999 when Renault took a big, risky position in the ailing company – is charged with tax fraud.

Philippe Lagayette, as lead independent director of Renault, in liaison with Board Committee Chairs Marie-Annick Darmaillac and Patrick Thomas, “acknowledged the contents of Nissan’s press release.”

“Pending provision of precise information from Carlos Ghosn, Chairman and Chief Executive Officer of Renault, the above directors wish to express their dedication to the defense of Renault’s interest in the Alliance. The Board of Directors of Renault will be convened very shortly,” they said. 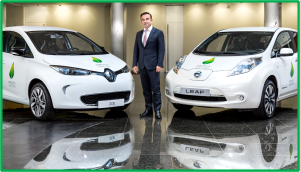 “It’s time to accelerate the shift to zero-emission mobility by working together with all parties concerned,” said Ghosn in 1999. He omitted zero taxes.

“The investigation showed that over many years both Ghosn and Kelly have been reporting compensation amounts in the Tokyo Stock Exchange securities report that were less than the actual amount, in order to reduce the disclosed amount of Carlos Ghosn’s compensation,” Nissan said in a terse and embarrassing face-destroying statement.

Ghosn also allegedly had “numerous other significant acts of misconduct” that have been uncovered, such as personal use of company assets. Kelly’s “deep involvement” was also  confirmed on these. (Renault-Nissan, Transdev To Study Autonomous Vehicles  and Nissan Leaf Debuts in U.S. at $32,780)

“As the misconduct uncovered through our internal investigation constitutes clear violations of the duty of care as directors, Nissan’s Chief Executive Officer Hiroto Saikawa will propose to the Nissan Board of Directors to promptly remove Ghosn from his positions as Chairman and Representative Director. Saikawa will also propose the removal of Greg Kelly from his position as Representative Director.”

Nissan has been providing information to the Japanese Public Prosecutors Office and has been fully cooperating with their investigation and will continue to do so, it said.

“Nissan deeply apologizes for causing great concern to our shareholders and stakeholders. We will continue our work to identify our governance and compliance issues, and to take appropriate measures.”