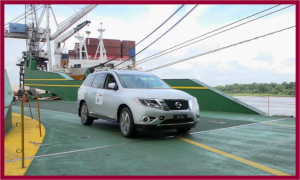 During 2012, U.S. exports from Japanese auto plants in the U.S. and Japanese purchases of U.S. automotive parts, many of them from relocated Japanese suppliers, are at an all-time high.

Nissan exports the first of more than 900 U.S.-built, right-hand drive Pathfinders to Australia and New Zealand this month. With the addition of these two new markets, Nissan ships vehicles from its Smyrna, Tennessee vehicle assembly plant to 61 markets. In 2014, Nissan’s Canton, Mississippi assembly plant will also become the global source for Murano production, creating export opportunities in as many as 119 markets.

Several factors are in play here. The weakness of the Japanese Yen during the past several years has forced Japanese production offshore. Even though the Japanese government is now manipulating the Yen to make it stronger, Japanese companies are still proceeding with plans to export from the U.S. that were put in place during the last decade. A ‘U.S. built’ label can be positive, especially for trucks and SUVs.

During 2012, U.S. exports from Japanese auto plants in the U.S. of 336,000 vehicles and Japanese purchases of U.S. automotive parts, many of them from relocated Japanese suppliers are at an all-time high, according to the Japan Automobile Manufacturers Association. The percentage of Japanese-brand vehicles sold in the U.S. produced in North America during 2012 has reached a record high of 70% as well as the Japanese produced 3,295,000. (Japanese U.S. Auto Industry Exports at Record or Milestones: Honda Builds 1 Millionth U.S. Made Auto for Export)

The news comes as trade tensions are rising between the U.S. and Japan over Japan’s manipulation of the Yen by keeping it artificially low to boost sales of Japanese products while blocking imports into Japan.

Nissan says that 12% of U.S. production went to export markets in 2012. Export volumes are expected to approach 14% in 2013 as the company continues to localize global products to the U.S. and launch in new markets around the world.

During the next six months, Nissan expects to expand U.S. exports of Nissan Altima, Pathfinder, Maxima and Infiniti QX60 models into new markets such as Ghana, Nigeria, Philippines, Vietnam, Israel, Argentina and parts of Latin America.

Ken Zino is an auto industry veteran with global experience in print, broadcast and electronic media. He has auto testing, marketing, public relations and communications expertise garnered while working in Asia, Europe and the U.S.
View all posts by Ken Zino →
This entry was posted in auto news, manufacturing, news analysis and tagged autoinformed, autoinformed.com, Japanese exports from u.s, Ken Zino, yen manipulation. Bookmark the permalink.