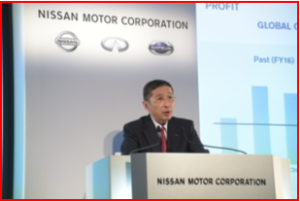 This sounds like Judy Garland singing The Company that Got Away (FCA). “The road gets tougher…

The Securities and Exchange Surveillance Commission (“SESC”) has recommended that the Financial Services Agency (“FSA”) should issue an administrative monetary penalty payment order of 2,424,895,000 yen against Nissan Motor Co., Ltd. For false disclosure documents. (The Securities and Exchange Surveillance Commission is Japanese, which is under the authority of the Financial Services Agency. It is responsible for “ensuring fair transactions in both securities and financial futures markets.”) *

Nissan still reeling from the Ghosn matter and its lax governance processes that benefited senior executives naturally played for time. It said in a statement: “The Company takes this recommendation extremely seriously and will consider its response after receiving the FSA’s official notice. In the absence of any special circumstances or other reasons, the Company intends not to dispute the alleged facts and the amount of the administrative monetary penalty.”

“As announced in the “Notice Regarding Filing of Correction Reports for the Company’s Annual Securities Reports” dated May 14, 2019, Nissan Motor Co., Ltd. (the “Company”), on May 14, 2019, filed correction reports with the Kanto Local Finance Bureau to correct the Company’s prior disclosures of officers’ compensation in its Annual Securities Reports for the 107th (April 1, 2005 to March 31, 2006) through 119th (April 1,2017 to March 31,2018) fiscal periods.

“The Company now announces that a press release was made by the Securities and Exchange Surveillance Commission (the “SESC”). The SESC has recommended to the Prime Minister and the Commissioner of the Financial Services Agency (the “FSA”) that the FSA should issue an administrative monetary penalty payment order of 2,424,895,000 yen against the Company in relation to the disclosure documents pursuant to Article 20(1) of the Act for Establishment of the Financial Services Agency.”

“Making false disclosures in annual securities reports greatly harms the integrity of public disclosures in the securities markets. The Company expresses its deepest regret to its stakeholders for any trouble caused. The Company will continue its efforts to strengthen its governance and compliance, including ensuring the accuracy of disclosures of corporate information.”