First half net income1 decreased by, gulp, 73.5% to 65.4 billion yen. The board of directors today set an extraordinary meeting of shareholders to be held in February 2020 to consider proposals for current directors leaving their positions and for new director nominees. The committee took into consideration candidate recommendations from Nissan (Makoto Uchida and Jun Seki), Renault (Pierre Fleuriot), and Nissan and Renault jointly (Ashwani Gupta). 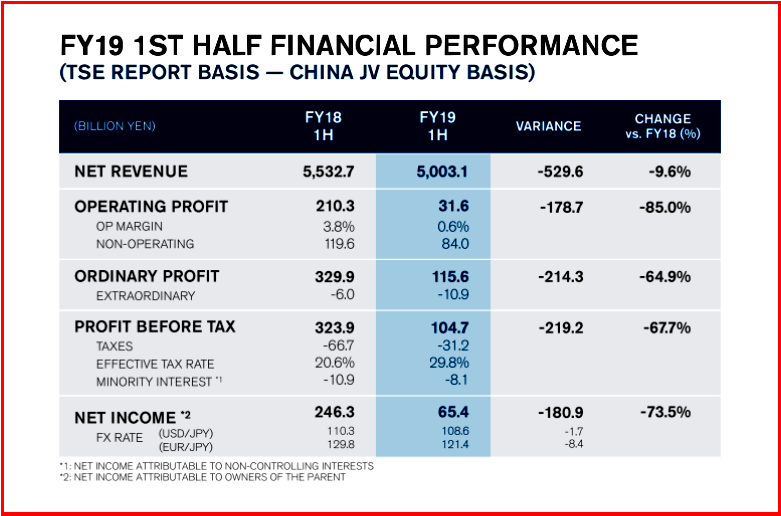 The Nissan Board of Directors voted an interim dividend of 10 yen per share, given the slower-than-expected progress of results in the first six months of the year and the downward revision of the earnings fiscal year forecast. Although the current full-year plan is for a dividend of 40 yen, Nissan plans to propose a dividend following internal discussion of the dividend plan and the midterm business plan. 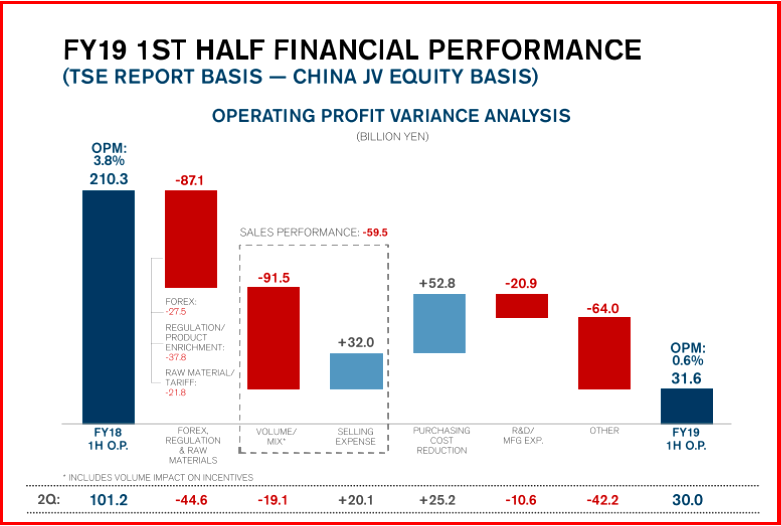 In Japan, Nissan’s sales decreased 1.3% to 281,000 units. The all-new Nissan Dayz continued to sell well, and the new Skyline launched in September, which features the world-first advanced driver support technology ProPILOT 2.0 and performance-enhanced turbo engine, has also been well received.

In China, where Nissan reports figures on a calendar-year basis, total industry volume decreased by 12.8%. Nissan’s sales were 718,000 units, roughly equal with the same period of the previous year, and market share increased 0.8 percentage points to 6.2%. This was helped by continued strong sales of core models including the Sylphy sedan and the Qashqai and X-Trail crossovers.

In the U.S., due to an aged product portfolio and continuing efforts to “normalize sales without ruinous incentves, sales decreased 4.3% to 679,000 units.

Nissan sales in Europe, including Russia, decreased by 19.7% to 265,000 units, amid ongoing changes in environmental regulations and an aged model portfolio.

In other markets, including Asia and Oceania, Latin America, the Middle East and Africa, Nissan’s sales decreased 11.4% to 360,000 units.

Operating profit for the first half is behind the announced plan. In addition, the yen has strengthened against Nissan’s original assumption of 110 yen to the U.S. dollar set at the beginning of the financial year. Nissan also predicts ongoing economic uncertainties and slowdown in total industry volume so it has revised its forecast for the full fiscal year.

For the 2019 full fiscal year, Nissan has reduced its global vehicle sales forecast by 5.4% from the initial to 5.24 million units.