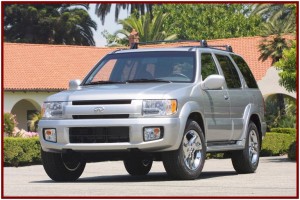 No rust induced steering failures are evident in certain parts of the U.S.,  claims  Nissan.

An accident in Canada has prompted Nissan to partially recall almost 200,000 Pathfinder and Infiniti QX4 sport utility vehicles because rust can detach the steering column from the firewall and cause the steering to ultimately fail.

Critics of regional recalls for safety defects maintain that they do not address the entire population of defective vehicles. Automakers like them since it cuts the expense by limiting the inspection to fewer vehicles.

Nissan maintains the rust problem only exists in areas of the country where road salt is used extensively during winter months. In those regions a mixture of snow, water and salt is apparently making its way into an assembly location hole under the hood. Over time, rust can crack the strut housing, possibly causing the steering column to break.

Nissan dealers in the affected states will inspect and repair as necessary rusted vehicles. A letter will be sent to owners Nissan knows about  on or  before 16 May. Owners may also contact Nissan at 1-800-647-7261.