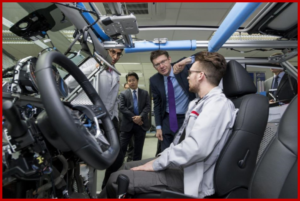 It follows recent announcements that both the refreshed Qashqai (the compact SUV Rogue in the U.S.) and the new Leaf, both coming soon, will be equipped with autonomous drive technology to enable single lane autonomous driving on motorways. How autonomous this actually is was undefined.

One in three cars built in the UK is a Nissan, but following the Brexit dustup (Brexit Automaker Winners, Losers – Predictable and Surprising, ‘Bloody Hell,’ What Does Brexit do to Automakers?), it’s not clear Nissan will stay in the UK. The Nissan Sunderland Plant currently employs 7,000 people, manufacturing the Nissan Qashqai, Juke, Leaf and the Infiniti Q30 and QX30 About 80% of production is exported to ~130 markets globally

The Nissan Technical Center Europe (NTCE) in Cranfield, Bedfordshire opened in 1991, and is now home to ~1,200 employees. Current projects include the development of vehicle-to-grid technology integration, electric battery advancements and the new Nissan Qashqai, which is scheduled to launch in fiscal year 2017. The original crossover – and Nissan’s best-selling vehicle in Europe – versions of the new Qashqai will be available to customers with autonomous drive for single-lane driving on the motorway.