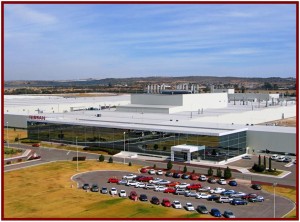 In Mexico, Nissan has been the market leader for three consecutive years and ended 2011 with a record market share of 25%.

Nissan Motor Company today announced plans to invest up to $2 billion for an all-new manufacturing complex in Aguascalientes, Mexico. The new facility joins two other Nissan plants in Mexico and begins operations in late 2013. Production of up to 175,000 units annually of Nissan’s ‘B’ platform products (Versa) is planned. Up to 3,000 direct jobs will be created initially at the new facility, with approximately 9,000 positions to be generated within the supply chain. Nissan’s total headcount in Mexico will expand to nearly 13,500.

The announcement comes as the United Auto Workers union is developing plans to once again try to organize transplants in the United States, where Nissan has two other plants. The UAW has been unsuccessful in previous organizing attempts, and its lack of international alliances with other unions is a decided disadvantage.The lack of exports from UAW organized Detroit Three plants is preventing the creation of middle class jobs in the U.S. – now clearly the issue in the upcoming presidential election. 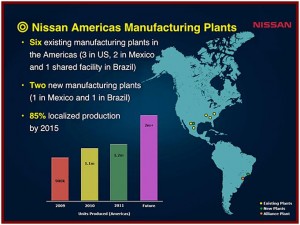 Nissan’s expansion in Mexico, made possible by the controversial NAFTA treaty, follows the company’s recent announcement that it will build an all-new manufacturing facility in Resende in the Brazilian state of Rio de Janeiro. That factory will begin production in the first half of 2014 and, together with the newly installed capacity in Mexico, will provide Nissan with the capacity expand throughout the Americas.

Mexican production includes the March, Sentra, Versa, Tiida, Tsuru, as well as the NP300 light trucks. Seventy percent of production is exported to 100 international markets. Approximately, 80% of vehicle content is made in Mexico. The company currently sells 22 vehicle nameplates in Mexico from its global vehicle portfolio.

In 2011 Nissan’s sales outpaced the Americas automotive industry, rising 17.2% to 1,561,230 units, according to Nissan. This gain moved Nissan into the Number 2 ranking among Asian brands by displacing Honda in the Americas with an overall market share of 7.5%, up from 7% a year earlier and 6.6% in 2009.

In the U.S., Nissan has gained market share for six consecutive years, ending 2011 with 8.2% percent of the U.S. market, up from 6% pre-Great Recession. Nissan and Daimler will produce Mercedes-Benz 4-cylinder gasoline engines together at Nissan’s powertrain assembly plant in Decherd, Tenn. Production will begin in 2014, with an installed capacity eventually reaching 250,000 units per year. The Decherd facility will make engines for upcoming Mercedes-Benz and Infiniti models.

In Mexico, Nissan has been the market leader for three consecutive years and ended 2011 with a record market share of 25%. In Brazil, Nissan’s business has been rapidly expanding with sales that nearly doubled in 2011. Nissan was Brazil’s fastest-growing automotive brand in 2011 and is now the 7th best-selling car brand in the country. In Latin America, Nissan finished 2011 with 10% market share, basically flat where it faces fierce competition from market leader General Motors, Fiat and Ford.

“Mexico is a key engine for Nissan’s growth in the Americas,” said Carlos Ghosn, chairman and chief executive officer, Nissan Motor Co, Ltd. “Together with our new plant in Brazil, this new manufacturing facility in Aguascalientes is an important pillar in our strategy to ensure that Nissan has the capacity it needs to increase sales volume and market share across the Americas.”