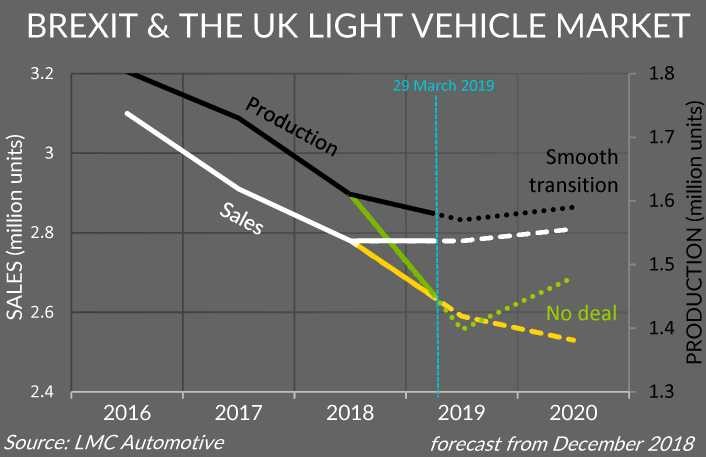 It’s not only angry Trump voters who are self-destructive, the UK under the Brexit fiasco is about to lose £9 Billion a year due to a conservative Republican-like temper tantrum that will materially hurt middle class workers, as well as society as a whole. (‘Bloody Hell,’ What Does Brexit do to Automakers?, Brexit Automaker Winners, Losers – Predictable and Surprising, Brexit Panic Takes Hold. Auto Industry Urges – Begs? – Negotiators to Avert the Business Killing Worst-Case Scenario)

Our friends from the LMC Automotive consultancy write that the impact of two different Brexit scenarios on light vehicle sales and production in the UK could produce devastating results. Worst case: A no-deal Brexit could cost the UK automobile market some £9 billion (€10 billion) in annual revenue, according to their research.

The breathtaking number is based on LMC market intelligence and forecasting specialist’s UK sales estimate of 2.53 million light vehicles (LV) in 2020 following in a no-deal scenario, 10% fewer than would be the case after a smooth-transition Brexit. The lost revenue figure, based on an average vehicle transaction price of £30,000, would be spread across OEMs, dealers, suppliers and other car industry participants. LMC Automotive has 2018 LV sales at 2.78 million units.

“The impact on the vehicle market would be greater than for the UK economy as a whole,” says Pete Kelly, LMC Automotive’s managing here director. The no-deal scenario, run by LMC in conjunction with Oxford Economics, assumes GDP growth of only 1% in 2019 and 0.8% in 2020 as opposed to 1.7% and 2.0% for a smooth transition, defined as a period of at least two years during which very little would change.

“As the UK imports most of its cars, prices would inevitably rise with the further devaluation of the pound after a no-deal Brexit. The very likely imposition of tariffs would only compound the negative effect on demand.”

On the production side, supply line disruptions in the immediate aftermath of 29 March 2019 could exa­cerbate the short-term market and “would cer­tainly affect all UK- based man­ufacturers, despite the inevitable stock build­ing before­hand.”

After a fore­cast of 1.61 million units this year, LMC Automotive places total “no-deal” UK light vehicle production at under 1.4 million in 2019 and 1.48 million in 2020 – respectively -11% and -7% lower than following a smooth transition. By brand, Nissan, Jaguar-Land Rover, Vauxhall/Opel, Honda and Toyota are the UK’s top five producers.

A no-deal Brexit might even threaten the existence of certain facilities. For the PSA Group, the Opel/Vauxhall Ellesmere Port plant may be tough to justify after 2021, when the current-generation Astra compact produced there is slated for replacement. Jaguar-Land Rover could divert more production to a new facility in Slovakia and/or increase contract production with Magna in Austria. Kelly is also concerned about the response of the Japanese brands.

“It would be overly optimistic to assume that manufacturers who export large portions of their UK output to the EU would continue to do so indefinitely under sustained difficult – and probably unprofitable – operating conditions,” Kelly adds.