Posted on 5 January 2019 by Kenneth Zino 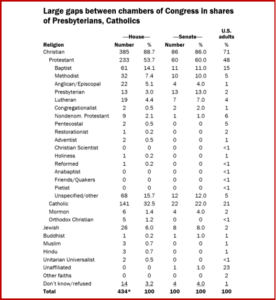 Christians as a whole – especially Protestants and Catholics – are still over-represented in proportion to their share in the general public in the new Congress. In fact, the religious makeup of the 116th Congress is vastly different from that of the United States population, according to *Pew Research.

By a wide margin, the largest difference between the U.S. public and Congress is in the share who are unaffiliated with a religious group. In the general public, 23% say they are atheist, agnostic or “nothing in particular.” In Congress, just one person – Sen. Kyrsten Sinema, D-Ariz., who was recently elected to the Senate after three terms in the House – says she is religiously unaffiliated, making the share of “nones” in Congress 0.2%.

The new, 116th Congress includes the first two Muslim women ever to serve in the House of Representatives, and is, overall, a tad more religiously diverse than the prior Congress.

There has been a 3-percentage-point decline in the share of members of Congress who identify as Christian – in the grid-locked 115th Congress, 91% of members were Christian, while in the 116th, 88% are Christian.

There are also four more Jewish members, one additional Muslim and one more Unitarian Universalist in the new Congress – as well as eight more members who decline to state their religious affiliation or lack thereof.

When asked about their religious affiliation, a growing number of members of Congress decline to specify (categorized as “don’t know/refused”). This group – all Democrats – numbers 18, or 3% of Congress, up from 10 members (2%) in the 115th Congress. Their reasons for this decision may vary says Pew. But one member in this category, Rep. Jared Huffman, D-Calif., announced in 2017 that he identifies as a humanist and says he is not sure God exists. Huffman remains categorized as “don’t know/refused” because he declined to state his religious identity in the CQ Roll Call questionnaire used to collect data for this report.

These are some of the findings from an analysis by Pew Research Center of CQ Roll Call data on the religious affiliations of members of Congress, gathered through questionnaires and follow-up phone calls to members’ and candidates’ offices.4

The CQ questionnaire asks members what religious group, if any, they belong to. It does not attempt to measure their religious beliefs or practices. The Pew Research Center analysis compares the religious affiliations of members of Congress with the Center’s survey data on the U.S. public.5

*Figures for members of Congress reflect the 534 members to be sworn in on Jan. 3, 2019. One race, in North Carolina’s 9th District, has not yet been certified due to allegations of electoral fraud committed by Republicans that could nullify the results of the election.