North American Production Up, But Sales Down 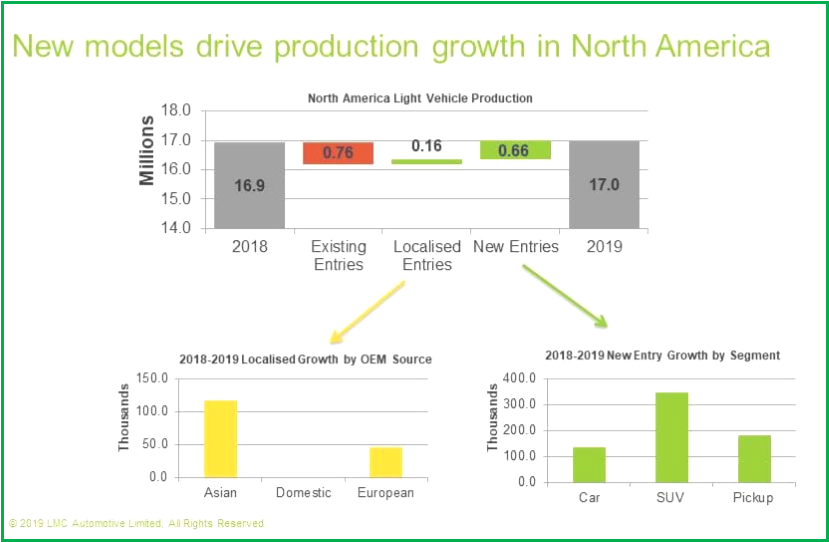 Call it a quirk of the uncertain trade wars, but our friends at Consultancy LMC write that light vehicle demand in North America is forecast to fall by nearly 2% in 2019, primarily because of the US market, where more expensive financing and pressure from the used-car market will hurt new vehicle sales. Notwithstanding this contraction, LMC expects to see a slight increase in North American production this year.

With 2018 in the rearview mirror, overall sales of imported vehicles increased by just over 2%, with imported SUV sales skyrocketing by more than 15%, due to a lack of regionally-produced models to meet the ever-growing demand for the boxy body style.

To fill this gap, production will outpace sales in the region in the coming year, with output of all-new SUV entries, viz vehicles that have never been sold in the region before or not sold for several years, set to increase dramatically. Among the models that shift towards higher localized SUV production will be GM’s Chevrolet Blazer and Cadillac XT6, as well as the Subaru Ascent, Kia Telluride and BMW X7.

A shift in consumer preference in favor of Pickups is also aiding regional production. Sales of Mid-Size Pickups are set to increase by nearly 12% this year, while the US Chicken Tax on Pickups will mean that most of those vehicles will not be imported into the region. New entries, such as the Ford Ranger and Jeep Gladiator, will provide a boost to regional output as Pickups take up a larger portion of the new vehicle sales mix.

LMC says, “the advantages of building where you sell still outweigh the risks.”

The bulk of the production growth this year will be driven by new entries, but previously imported models – also known as ‘localized models’ – will also feed production growth. Localized models like the Volvo S60 and BMW 3 Series, as well as the Toyota RAV4 – which, historically, had sales split between imports from Japan and local production out of Canada, will now be exclusively produced in Canada for the North American market –adding incremental production volume to the region. While there is some exposure in Trump’s largely unsuccessful tweet-driven trade threats, the advantages of building where you sell still outweigh the risks.

Together, the combined output growth from these new entries and localized models should offset lower production volumes of existing models. No surprise that 55% of that decline will be felt in the Car segment – sedans, hatchbacks and coupés.

LMC’s caveat: “risk to our North American production forecast is skewed to the downside, as factors such as pressure on demand – especially on regionally-produced Cars – and the ongoing possibility of retaliatory tariffs will continue to weigh heavily on the industry in 2019.

Ken Zino is an auto industry veteran with global experience in print, broadcast and electronic media. He has auto testing, marketing, public relations and communications expertise garnered while working in Asia, Europe and the U.S.
View all posts by Kenneth Zino →
This entry was posted in economy, manufacturing. Bookmark the permalink.