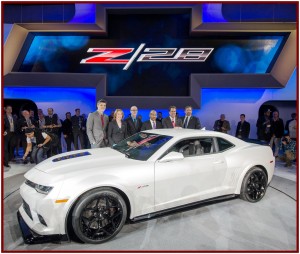 The 2014 Chevrolet Camaro Z/28 team posing with the pony car during its world debut during the 2013 New York International Auto Show in March.

First, it was the Corvette Stingray. Now it is Camaro’s turn to take a drive down memory lane. As Chevrolet showed a mildly restyled 2014 Camaro lineup at the New York Auto Show, it announced the return of the Z/28, arguably the most famous model in Camaro history.

The 2014 Camaro – the best selling sports car in the U.S. for the past three years, has a revised exterior design that tweaks aerodynamics for more efficient cooling and stability at high speeds. Chevrolet also claimed that the Z/28 has a full aerodynamics package that creates down force at higher speeds, making it the most track-capable but street legal set-up in Camaro’s history. The engine is the lighter, naturally aspirated 7-liter LS7 first introduced in the Corvette Z06.

“As the ultimate track-capable Camaro, this car restores the mission of the original Z/28, and serves as a testament to the expertise of Chevrolet as the best-selling brand of performance cars,” said Mark Reuss, president, GM North America, who curiously did not mention Camaro’s current dominance in drag racing.

The 2014 models are being called by GM the most significant change for the fifth-generation Camaro since it 2009 introduction. The new Camaro will be joined by the all-new Corvette Stingray and Chevrolet SS performance sedan, completing a line of new performance vehicles that Chevrolet will offer next model year.

However, a major redesign of the pony car is a few years off. That Camaro will move production from what is now its home plant in Oshawa, Ontario since its fifth generation revival in 2009 to Lansing, Michigan. Ford is scheduled to build a heavily revised Mustang in Michigan during 2015, meaning the pony car and horsepower wars will continue for the near future. (Read Car Spy Jim Dunne Catches a Revised 2015 Ford Mustang)

The first Camaro Z/28, of course, was introduced in 1967, created to compete in the Sports Car Club of America’s Trans-Am 2 class. It had a smaller, lighter, 302-cubic-inch V8 engine for improved balance, as well as quick-ratio steering and a heavy-duty suspension for track use. In keeping with its road-racing focus, the 1967 Camaro Z/28 was not available with an automatic transmission or air conditioning.

The new Z/28 is not designed for a specific race series, but it is on paper a competitive piece. Chevy claimed that Z/28 is three seconds faster per lap than the Camaro ZL1, without specifying the racetrack. The claimed extra speed comes from:

As with the original, the 2014 Z/28 is offered only with a manual transmission. However, this time around the course, air-conditioning is available, but only as an option. Unlike the Ford Mustang Boss 302, 2+2 seating remains. A total of nine pounds was saved by eliminating the rear seat-back pass through, as well as using high-density foam in place of the rigid structure of the seat back and steel mesh of the seat bottom. For two seater fans, Chevrolet already has the Corvette.

The new 2014 Camaro line will arrive at Chevrolet dealers later in 2013. The Z/28 is expected to be appearing at track events across the United States in spring of 2014. Read AutoInformed on 2014 Chevrolet Camaro SS Debuts in New York Next Week