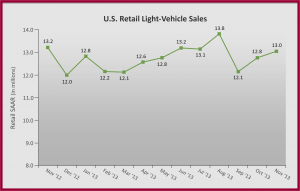 Through the first half of November, the average transaction price of new vehicles is $30,079, an increase of $461 from November 2012.

Total U.S. November light-vehicle sales are predicted to reach 1.2 million, a 3% increase from November 2012. New retail sales in November are expected to reach 1,030,300, a 4% increase compared to last November, as the slow recovery of the auto market continues. Fleet sales are anticipated at 16% of total sales in November, a -3% decline year-over-year. This, according to J.D. Power the source of the forecast, is consistent with the low fleet share throughout 2013.

The November seasonally adjusted annualized rate or SAAR for retail sales, thought to be the most accurate measure of true underlying consumer demand for new vehicles, is projected at 13 million, up from the year-to-date level of 12.8 million.

Through the first half of November, the average transaction price of new vehicles is $30,079, an increase of $461 from November 2012. Sales and transaction price increases mean that consumers will spend 10% more on new vehicles during the month than they did in November 2012, and nearly double the level of November 2008 during the Bush Administration’s Great Recession. This leads to a prediction that total consumer spending on new vehicles in 2013 will exceed $370 billion. This is the highest amount ever (it’s not adjusted for inflation, though) and considerably above pre-recession levels.

“The sales pace in September and October were plagued by external variables that caused a lower level of demand, so the returning strength in November confirms that the underlying recovery remains intact,” says Jeff Schuster, senior vice president of forecasting at LMC Automotive.

The lower October sales pace, combined with higher production, has led to a 77-day supply, higher than the 60- to 65-day supply normal range.