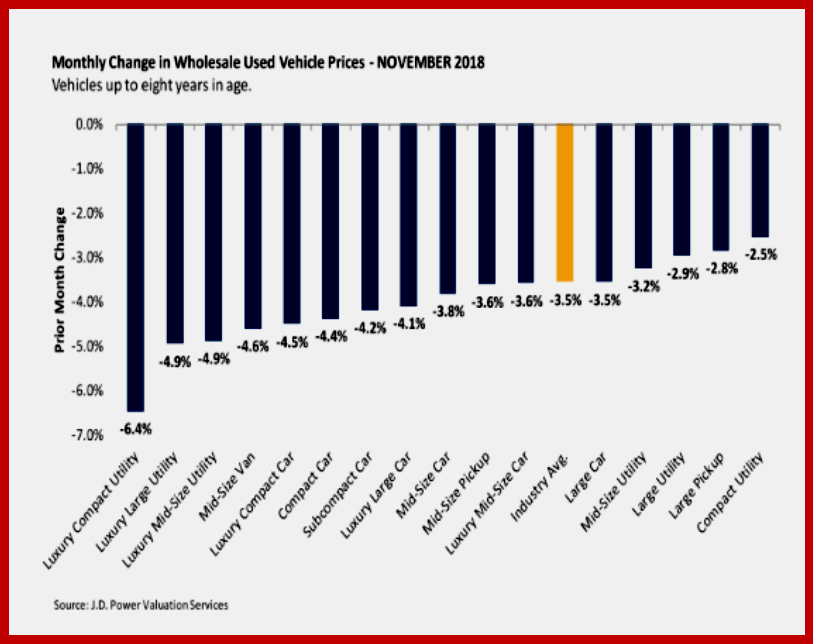 Used vehicle prices in the U.S. dropped once again in November, marking the third consecutive month of declines. As a result, the Seasonally Adjusted Used Vehicle Price Index declined by -0.8 point, relative to October, to 119.7, according to J.D. Power.

Some of the worst losses are in the luxury mid-size car segment, which has seen steady year-over-year declines since 2012. Prices for this segment are expected to decline by more than 7% annually.

In non-index terms, wholesale prices of used vehicles up to 8-years in age fell by -3.5% in November relative to October. November’s performance was almost identical to the period last year. However, going back further, the previous 5-year average for the period has been a lesser -2%.

Losses at the segment level were mixed in November. On the mainstream side, passenger car losses accelerated while SUV and truck losses returned to
being some of the leanest in the industry. The opposite was true for premium segments in November.

Losses were the most severe for luxury SUV segments, however passenger car segments followed closely behind Automakers decreased incentive spending in November for the third time since April 2015. On average, according to AutoData, spending reached $3,718 per unit versus $3,811 per unit in November 2017.

At the mainstream brand level, Chrysler’s $5,355 average incentive spend was the highest among the non-luxury brands. At the other end of the spectrum, Subaru spent only $1,146 per unit, down 8% compared to the same period in 2017.

The Bureau of Economic Analysis [BEA] second estimate for third quarter 2018 GOP growth is 3.5%. This estimate was unrevised compared to the advanced estimate from the prior month. The increase in GOP reflected an increase in personal consumption expenditures private inventory investment, federal government spending, and state and local government spending. These increases were partly offset by negative contributions from exports and residential fixed investment.

The unemployment rate remained unchanged 3.7% in November and the number of unemployed individuals remained the essentially unchanged at 6.0 million. Employment grew in transportation and warehousing, health care, and manufacturing. The U- 6 unemployment rate which measures discouraged, part-time, or underemployed workers in the economy, is at 7.6% for the month of November which is slightly higher from 7.4% in October.

Non-farm employment increased by 155,000 jobs in November which was a decrease following October’s growth of 250,000 jobs. Employment continued to trend up in several industries including manufacturing, transportation, and health care while the wholesale and retail trade, information, and financial activities remained stagnant. The average monthly gain in jobs over the past 12 months stands at 209,000.

The National Association of Realtors – known at AutoInformed for fiddling numbers – reported existing home sales at a seasonally adjusted annual rate of approximately 5.22 million homes during the month of October. This illustrated an increase of 1% from September and a decrease of 5.1% from October of last year. The median home price for existing home sales decreased to $255,400 in October. It is still up 3.8% from a year ago. Existing home inventory for October is at 1.85m, down from 1.88m last month and up from 1.80m one year ago. This reflects a decrease of 1.60% from last month and an increase of 2.78% last October.

Energy prices reached a bear market in November. Many factors contributed to the sudden and unexpected sharp selloff, including surging production and Iran sanctions, which were not as stringent as once thought. U.S. gasoline prices averaged $2.64 per gallon in November, a decrease of 22 cents/gal as compared to October. The year-over-year increase in gasoline prices was approximately $0.08 per gallon [3.0%] higher than the prior year.