NSC Says Much Work Needs to be done on Distracted Driving. Again Urges Total ban on all Cell Phone Use 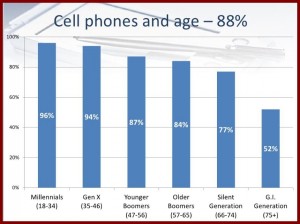 The National Safety Council today released its State of the Nation 2012 report in conjunction with Distracted Driving Awareness Month. The study looks at the slow improvements made to combat cell phone use while driving. In the three years since NSC called for a nationwide ban, NSC says progress has been made in legislation and enforcement, corporate policy, public perception and technology.

“We are pleased to see the traffic safety landscape is shifting and cell phone use while driving is being addressed,” said Janet Froetscher, president and CEO of NSC. “However, much work still needs to be done, especially in educating the public on the dangers involving hands-free devices.

In January 2009, NSC became the first national organization to call for a total ban of cell phone use – hands-free and handheld. Cell phone distracted driving remains a significant threat to public safety in the3 view of many researchers and safety advocates. Automakers and cell phone providers have not only chosen thus far to ignore the problem, but have actually increased the electronic content and internet connectivity of their products – cynically in the view of critics.

On Dec. 13, 2011, the National Transportation Safety Board became the first government agency to recommend a total ban of portable electronic device use for all motorists while a vehicle is in motion, drawing more attention to the public health threat all motorists face on our roadways.

In February, NHTSA proposed groundbreaking federal guidelines for automakers to limit the ‘distraction risk’ caused by the growing number of in-vehicle electronic devices. The new distracted driving design recommendations appeared to catch automakers off guard since they did not have a ready response and the guidelines appear rule out virtually all moving map displays in vehicles.

Moreover, NHTSA said this was only the first of a series of proposed distracted driving design practices that manufacturers can use to ensure the systems or devices in their vehicles are less likely to distract drivers and cause accidents. The intent is to “limit tasks not directly relevant to safely operating the vehicle, or cause undue distraction by engaging the driver’s eyes or hands for more than a very limited duration while driving.”

While not a formal regulation (yet?), the voluntary design standards from the National Highway Traffic Safety Administration bring additional pressure on automakers to reform automotive electronics. Thus far, automakers have ignored with impunity the deadly results from the consequences of the growing use of an increasing array of in-vehicle electronic devices and screens. Even if they do not become regulations, the guidelines will make it difficult for consumer organizations – say Consumer Reports – to recommend vehicles that do not meet them. Moreover, you can be sure that NHTSA will ultimately incorporate them into its own safety ratings.

Last month Chapel Hill in North Carolina passed a bill that calls for a total cell phone ban for all motorists, effective 1 June because of their pernicious role in distracted driving. This makes Chapel Hill the first town in the United States to ban hands-free use of cell phones. Motorists also will be banned from using on-board wireless systems in vehicles – another first-of-its-kind law.

Problems with Distracted Driving data, including:

In 2010, NHTSA changed the way it measured fatalities involving distracted driving crashes in its Fatality Analysis Reporting System (FARS). Curiously, as a result, federal numbers of fatalities were significantly lower in 2010 than they had been in 2009. The changes in measuring these crashes means FARS crash fatality data from 2010 cannot be compared to data from previous years.