Posted on 4 October 2011 by Kenneth Zino 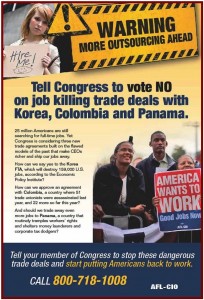 Change you shouldn't believe in?

The Obama Administration has sent three pending and controversial trade agreements with South Korea, Colombia, and Panama to Congress, and votes are likely to occur next week, the loss of jobs in the U.S. economy continues with 25 million people in need of full time work.

The Administration’s move is opposed by some of its strongest supporters, and it comes as it struggles with the “No Jobs Obama” tag being used against it by Republicans looking to return to power in the 2012 elections. Union activists across the country instituted a series of actions today that asked members to call their members of Congress and say “NO to these job-killing trade deals.”

Bob King, president of the UAW stands alone among union heads by favoring the Korean FTA, an agreement that the President and UAW previously vehemently opposed. Korea is the fifth largest producer and fourth largest exporter of motor vehicles in the world, but its market is closed to imports. (See UAW Defends Korean FTA as Other Unions Protest Deal)

The AFL-CIO said the “The Korea agreement is the largest offshoring deal of its kind since NAFTA. If enacted, it likely will displace 159,000 U.S. jobs, mostly in manufacturing. And its glaring loopholes would allow unscrupulous businesses to import illegally labeled goods from China and possibly even from sweatshops in North Korea—potentially without any tariffs at all.”

The AFL-CIO also launched ads today calling on Congress to oppose flawed trade deals with Korea, Colombia and Panama.  The ads were placed in The Hill, Roll Call and Politico newspapers. The ads coincided with a fly-in lobby day that brought workers to Washington, DC to call for a “new trade model which benefits working families.”

The ad says, “25 million Americans are still searching for full-time jobs. Yet Congress is considering three new trade agreements built on the flawed models of the past that make CEOs richer and ship our jobs away – tell your members of Congress to stop these dangerous trade deals and start putting Americans back to work.”

The AFL-CIO also pointed out that Colombia continues to be the most dangerous place in the world for trade unionists where 51 trade unionists were assassinated last year and 22 so far this year.  And Panama, which routinely tramples workers’ rights, is a known haven for tax dodgers and money launderers.