Offshore Brand US Auto Sales Rose During a So-So October 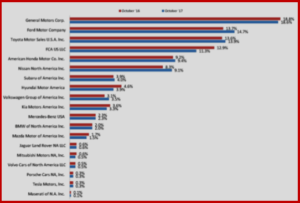 Even though Trump hasn’t implemented his promised offshore tax on imports or took on China for its currency manipulation and trade practices, international brands once again controlled the U.S.  auto market during September by selling 748,614 vehicles, commanding 55.3% of overall sales. Last month, they sold 848,906 vehicles and occupied 55.7% of the market. During October 2016 offshore brands took 54.5% of the market by selling 747,980 vehicles.

AutoData Corp. says that the seasonally adjusted annual rate (aka SAAR) for October was 18.09 million units versus 17.87 million units a year ago. Total industry unit deliveries, including domestic brands and un-adjusted for business days, decreased -1.3% compared to last October. Offshore brands rose 0.08% as a group. Nonetheless sales for all brands were down 1.7% year to date. Industry-wide, 1,354,875 vehicles were sold in October compared to 1,372,320 units sold during October 2016.

Trucks and SUVs continued to rule sales across the country. Seven of the month’s top-ten-selling vehicles fell into the category, with the Ford F-Series, Chevrolet Silverado, and Ram pickups maintaining their lead at the top three spots. However, much to the shame of Detroit, the balance of the Top Ten spots were occupied by offshore brands. The Detroit Three can’t give away a car. Quality is a large actor here. (see Consumer Reports: Infotainment, Transmissions Hurt Reliability. Detroit Three Quality Dismal) 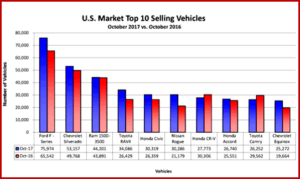 When buying crossovers, Americans continued to drift toward international brands. In fourth place overall for the month, the Toyota RAV4 – the first compact crossover SUV – was the top-selling vehicle in segment with sales up 29% over last October. The Nissan Rogue also strong, posted a sixth-place finish for the month and a sales increase of 43% from last October. The Honda CR-V finished the month in seventh place with sales down -8.4%. The Chevrolet Equinox captured the tenth-place slot with sales up 28.5% from October 2016. The Top Ten is important because that where the volume is – more than 25% of the total market – and hence the profits.

Despite the ongoing popularity of trucks and SUVS, three cars continue to be favorites among American shoppers. The delightful Honda Civic posted a fifth-place finish in October with sales up 1% from last October. Honda Accord saw sales up 4.7% for the month, finishing in eighth place, while the Toyota Camry logged a ninth-place finish in October but even here there are signs the Detroit’s car conundrum: Sales for the Camry were down 11.2%.

NAFTA negotiators from the U.S., Canada, and Mexico were strongly against proposed changes to the trade agreement’s rules of origin on North American and U.S. content. Looking at North American manufacturing, consider  that these production facilities – some located in the U.S. – supplied 470,948 vehicles in October. These included 212,058 Asian brand cars, 222,742 Asian brand trucks, 17,702 European brand cars, and 18,446 European brand trucks, according to consultancy LMC. These are now under a Trump assault but are nonetheless expected to bring Mexican auto production from 19% of NAFTA today to 26% in 2020, no matter how bellicose Trump is.

The fourth round of North American Free Trade Agreement (NAFTA) negotiations between the United States, Canada, and Mexico began October 11, 2017 in Washington, D.C. “So far, the previous rounds of negotiations have produced little progress on the issues of greatest concern to the automotive industry, and this slow pace of resolving issues on the table calls into question the prospect of wrapping up negotiations by the end of the calendar year, according to the respected think tank The Center for Automotive Research, aka CAR. The modified NAFTA agreement must be approved by the end 2018.

ules of Origin (ROO) are one of the hardest NAFTA issues for the automotive industry, in CAR’s view. Currently, NAFTA contains a 62.5% threshold for Regional Value Content (RVC) in motor vehicles and parts, which is the highest ROO of any U.S. trade agreement.

The Trump Administration has recently proposed:

The U.S. accounts for two thirds of North American vehicle production, but there are significant investment plans and decisions in place at major auto makers to re-source capacity from Asia and Europe to Mexico, according to consultancy LM. These are now under a Trump assault but are nonetheless expected to bring Mexican auto production from 19% of NAFTA today to 26% in 2020, no matter how bellicose Trump is.  (see AutoInformed.com on What Auto Companies are at Risk Under Trump?)

However, without sizable investments in plants in the US, it appears to be virtually impossible to add more than an additional 500,000 units of volume from Mexico – or elsewhere. LMC says the creation of new capacity in the U.S. would likely result in the closure of existing plants in Mexico, or running them severely underutilized. Either, of course, would be expensive to automakers, impacting profitability and have potentially negative effects for suppliers. None of these appear to have impeded on the “thinking” of Trump.

What If Negotiators Don’t Reach an Agreement by the End of 2018?

The last option—terminating the agreement—is a real possibility. The U.S. Congressional Research Service has written several reports that detail what could happen if NAFTA was terminated, and there are no clear-cut answers (Canis, Villarreal, & Jones, 2017), (Villarreal & Fergusson, The North American Free Trade Agreement, 2017), (Villarreal, U.S.-Mexico Economic Relations: Trends, Issues, and Implications, 2017), (CRS Reports & Analysis: Legal Sidebar, 2017). Trade dispute resolution mechanisms would disappear; the U.S. and Canada would have to decide whether to reinstate their previous bi-lateral trade agreement; and Congress would have to rescind NAFTA’s enabling legislation, and that could be a tall order.

However, the most likely outcome, according to the Peterson Institute for International Economics (PIIE), is that the parties will “muddle through” with concessions on specific products and some “modernization.” PIIE researchers project that renegotiation will stretch beyond December 2017. What exactly those concessions will be, or what form “modernization” might take will be better known, but certainly not concluded from this round of negotiations. In short, no one “wins.” (Hufbauer, Jung, & Kolb, 2017).

AutoInformed is not so certain: Auto manufacturers could decide that the higher RVC threshold and the proposed validation process is too costly, and that it would be cheaper to skip the NAFTA preference for the 2.5% Most Favored Nation (MFN) tariff on motor vehicles and parts imported to the United States.

Ken Zino is an auto industry veteran with global experience in print, broadcast and electronic media. He has auto testing, marketing, public relations and communications expertise garnered while working in Asia, Europe and the U.S.
View all posts by Ken Zino →
This entry was posted in marketing, news analysis, sales and tagged autoinformed.com, Ken Zino, nafta, NAFTA and Canada, NAFTA and Mexico, October US Sales, Trump versus auto industry. Bookmark the permalink.