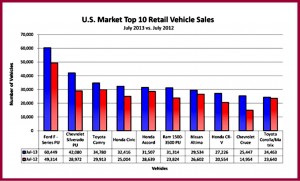 Offshore nameplates represented six of the top ten selling vehicles in July—up from five in June.

While the recovery of the large pickup truck market bolstered U.S. sales at the Detroit Three during July, offshore brands posted impressive gains and grabbed 57% of the market, up from 53.5% in June. Six of the Top Ten selling vehicles were from over there or over here where many are now made.

GM by slightly outperforming an overall market that was up 14% easily held onto its Number One spot in the U.S. at 234,071 vehicles sold. However, Ford Motor slipped to Number Three as Toyota had a stronger month with sales soaring to 193,394 to Ford’s 190,080. March of 2010 was the last time Toyota topped Ford and with a new 2014 Corolla compact car and full size Tundra pickup truck just entering production, the back half of the year will see a battle royal between the two global automakers.

If you want to play the percentage game, then the top spot goes to Subaru, which increased sales 43% to 36,000 vehicles. Its all-wheel-drive system, utilitarian styling and high quality levels of its Forester, Outback, and Impreza during the past decade have hurt Audi (13,000) and Volvo (6,000), both of which had a claim, but not a lock on these customers as Subaru proves monthly.

As said earlier, offshore brands represented six of the top ten selling vehicles in July—up from five in June. The Toyota Camry continued to be the best-selling car in America, in third place for the month overall behind the Ford F-Series and Chevrolet Silverado pickups. The Camry sold 34,780 units and was up 16.3% compared to last July.

Ford drastically cut its U.S. production and shed tens of thousands of skilled workers during the Great Recession, and its Mexican built Fusion is in short supply – its sales actually dropped 10% to 20,522 during July – and it is getting kicked from all sides by not only Camry, but Honda Accord (31,507) and Nissan Altima (29,534), among others.

Fusion posted record ytd sales of 161,146 vehicles despite several devastating recalls on the revised 2014 model, for an increase of 18% in the first half of 2013 (Camry reigned though at 242,406; Accord followed at 186,860). Ford is scrambling to increase capacity by adding a Fusion line to the Flat Rock Michigan plant, which is due to start producing this fall. Quality is unknown at this time.

Honda, which is now arguably more of an American car company than Ford and not an offshore brand, (but not necessarily with higher quality levels) occupied three spots on the Top Ten list—more than any other automaker. In fourth place, its Civic compact sold 32,416 units and was up 29.6% compared to last July. The Honda Accord followed in fifth place with sales of 31,507 units, up 10%. The Honda CR-V is in eighth place up 32.5% with sales of 27,226 units. In seventh and tenth place, respectively, the Nissan Altima (29,534) and Toyota Corolla/Matrix (24,463) rounded out the international nameplate models on July’s top ten list.

“Low interest rates, a recovering construction industry, and rising consumer confidence are all good news for dealers,” said AIADA President Cody Lusk. “The auto retail industry appears to be well on the path to recovery.”