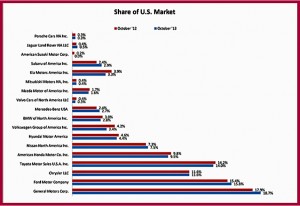 “The government shutdown appears to have had a limited impact on sales.”

The government shut down. The SAAR slipped to a seasonally adjusted annual rate of 15.23 million units. Offshore brands were outpaced by soaring Detroit Three truck and SUV sales, according to the final October U.S. sales results from AutoData.

The upshot – Asian and European brands saw their share slip almost -1% to 54% of the U.S. Market in October. The leading offshore group, Toyota Motor, posted a sales increase of 8% (168,976) from October 2012, but the automaker lost market share for the first time in five months. Volkswagen Group, without a truck lineup and with an aging product line, posted its biggest sales decline of the year at -18% to 41,534, with the VW brand itself plummeting -18% to 28,129 vehicles. This, while the Detroit Three posted double-digit sales gains from SUVs and pickup trucks. 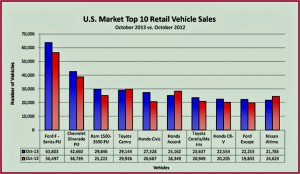 The U.S. Treasury said this about the shut down: “The federal government shutdown in October will reduce the output of government services in the fourth quarter, though this should prove to be only a temporary restraint. A second round of sequester cuts in January could prove to drag on the economy for longer. The temporary nature of the resolution of the budget and debt ceiling implies that the possibility of another shutdown poses some downside risk to the outlook. The headwinds associated with the 2013 tax hikes should fade, partially offset this fiscal drag in 2014.”

Overall, the Detroit Three sold 556,028 units, up from 513,457 units in September and 486,176 last October in spite of the Washington follies. The important Top Ten Sales leaders were the usual nameplates, but a surging Ram Truck at almost 30,000 units sold moved into the Number Three spot, behind the perennial Number Two Chevrolet Silverado and Number One Ford F-Series.

As usual,  six out of the Top Ten selling vehicles were from offshore brands: Toyota Camry fourth; Civic in fifth place, Accord sixth, Toyota Corolla/Matrix seventh, Honda CR-V eighth place, Ford Escape ninth and Nissan Altima tenth. Nary a Detroit Three car on the list, but if Ford ever gets its production up on the Fusion, it has a good chance at making it into the Top Ten. Offshore brand vehicles continued to increase their manufacturing presence in North America. These plants supplied 386,281 of the vehicles sold in October. Asian brands sourced 358,332 of their vehicles from North American manufacturing facilities, while European brands sourced only 27,949 vehicles from North American plants.

“Fortunately for the industry, the government shutdown appears to have had a limited impact on sales,” said AIADA President Cody Lusk. “The growth we have seen throughout 2013 is solid and sustainable, and should continue to benefit manufacturers, dealers, and consumers alike.”

Ken Zino is an auto industry veteran with global experience in print, broadcast and electronic media. He has auto testing, marketing, public relations and communications expertise garnered while working in Asia, Europe and the U.S.
View all posts by Ken Zino →
This entry was posted in sales and tagged aiada, autodata, autoinformed, autoinformed.com, Ken Zino. Bookmark the permalink.