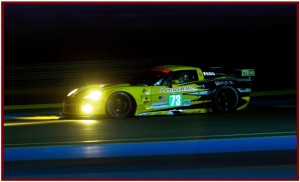 Chevrolet does well in endurance racing take on BMW, Ferrari and Porsche in the GT class at Le Mans. The American cars are loved by fans for their noise and speed.

While the success or failure of a heavily revised 2014 model C7 Chevrolet Corvette will be much debated this week at the North American International  Auto Show this week in Detroit, the success of Corvette’s racing program seems certain, as the provenC6.R will return for the 2013 season. The C7.R based on the new Sting Ray will make its racing debut in 2014.

Chevrolet historically does well in overseas endurance racing by taking on BMW, Ferrari and Porsche in the GT class at Le Mans. For makers the minimum production figure is 100 models, and for small constructors 25. At least 300 engines must have been made. Cars with a carbon chassis are accepted, provided at least 300 have been built.

Corvette Racing the most successful team in ALMS history, with a total of 77 class wins, eight drivers’ championships, and nine manufacturer and team championships since 2001. The team has also taken seven class victories in the 24 Hours of Le Mans since 2001.