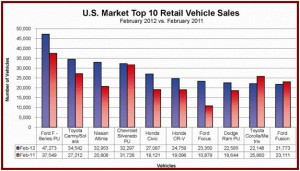 While domestic automakers are recovering, offshore brands maintained their lock on a majority of the U.S. auto market in February.

Since the overall light vehicle sales market grew by 16%, only Nissan actually kept pace with the slow recovery in auto sales that saw the best February since 2008, although Nissan also has the highest incentives in the group.  Economic indicators – from consumer confidence to the stock and job markets, are showing the best results in four years. This is good news for automakers since sales are off to their strongest start industry-wide since 2008 at a strong seasonally adjusted annual selling rate or SAAR of 13.3 million light vehicles.

The difference among the Japanese Big Three was more pronounced in the higher-margin luxury segment. As usual, Lexus easily led the way with almost 17,000 luxury cars and trucks, followed by Acura at 11,000 and Infiniti at 9,000 vehicles. 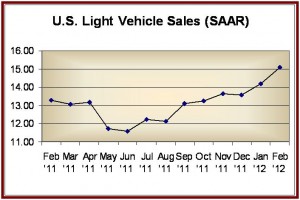 Sales are off to their strongest start industry-wide since 2008 at a strong seasonally adjusted annual selling rate or SAAR of 13.3 million light vehicles.

The car to watch here is the newly arrived Lexus GS. The sizzling performance sedan posted sales of 2,396 units, with 25 % of the mix sold as F-Sport Models. AutoInformed test drives on the road and track show the GS F-Sport easily outperforms the facing competition from BMW and Mercedes-Benz. Attacking German performance cars is the last frontier for Lexus. Stay tuned, because one month doe not a sales trend make.

Note should also be made of Volkswagen, which posted strongest February for sales in four decades with sales up 42.5% over February 2011. Mazda also had a 32.3% increase, with Hyundai up by 17.5% and Subaru was up 17%.

While domestic automakers are in better shape than they have been, offshore brands maintained their lock on a majority of the U.S. auto market in February. They occupied a 54.9% share, down slightly from 55.8% last month, which meant 631,152 vehicles sold, up from 509,793 in January.

“I am confident 2012 will continue to be the best year our industry has seen in quite awhile,” said American International Auto Dealer Assn. President Cody Lusk. No argument here…