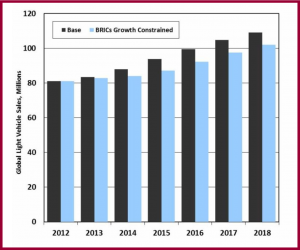 Global light vehicle sales could be slowing down, and if the recent trend continues, tens of millions of car sales would disappear from five-year global forecasts. This is according to a scenario just released by LMC automotive.

Most forecasters assume continued solid expansion in sales because of robust growth in emerging markets. If that growth were constrained, the impact would be severe.

“Emerging market slowdown may become more evident than our baseline forecast expects. For example, if Chinese government policy to curb speculative investment comes too late and is implemented too aggressively, the shift away from overinvestment could happen quickly, while a shortage of liquidity during the transition would be dangerous,” according to Pete Kelly, Managing Director of LMC.

The negative effect of a severe contraction in Chinese investment could carry over into neighboring East Asia. Ripples would be felt worldwide with other emerging markets particularly vulnerable to the slowdown.

This constrained growth in the so-called BRIC countries (Brazil, Russia, India and China) is one of five scenarios considered in the release of a new Global Automotive Scenarios Service from LMC and Oxford Economics.

“Under this particular scenario, global light vehicle sales growth would drop from our baseline assumption of 5.5% to just over 1% in 2014,” said Kelly. “Worldwide, more than 30 million units of light vehicle sales would be lost from our forecast between now and 2018.”

“Even though we have confidence in our baseline forecast, the future reality could be very different. In this context, quantifying the impact of different outcomes has become a key requirement for the automotive industry,” Kelly added. “Planning or stress-testing plans for different future macroeconomic outcomes is an important part of most organizations’ approach to uncertainty.”

In LMC’s view, before the Great Recession of 2008 and 2009, it seemed reasonable to make assumptions based on a balanced-risk approach using one central forecast projection. LMC claims that the global economy is now subject to significant and unpredictable risks to any forward-looking projections. The recent financial and economic turmoil heightens concern over the potential impact on the economy of several possible global disruptions.

Ken Zino is an auto industry veteran with global experience in print, broadcast and electronic media. He has auto testing, marketing, public relations and communications expertise garnered while working in Asia, Europe and the U.S.
View all posts by Ken Zino →
This entry was posted in economy and tagged autoinformed, autoinformed.com, global vehicle sales forecast, Ken Zino, lmc, oxford economics. Bookmark the permalink.